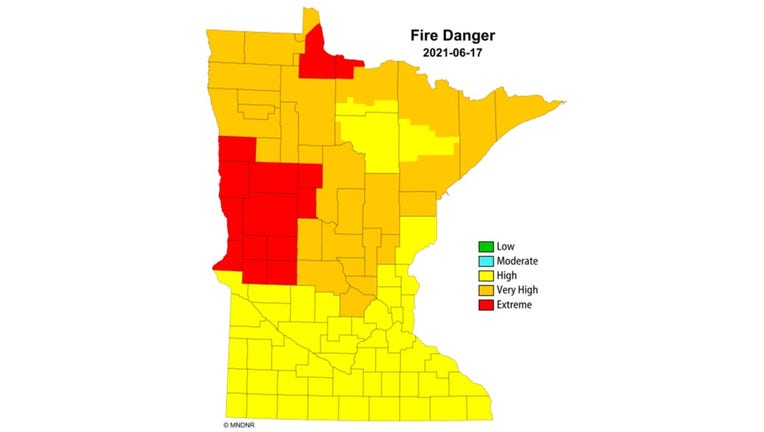 Months of dry weather in Minnesota have lead to high fire danger across the state. (MN DNR)

ST. PAUL, Minn. (FOX 9) - Amid dry conditions statewide, a Fire Weather Watch will be in place Friday for much of Minnesota, according to the Minnesota Department of Natural Resources.

This means gusty winds and low humidity are in the forecast - elements that will allow a fire to spread quickly.

Amid dry conditions statewide, a Fire Weather Watch will be in place Friday for much of Minnesota, according to the Minnesota Department of Natural Resources.

Also, stricter burn restrictions are in place starting after midnight Friday for some northern Minnesota counties.

Those new restrictions from the DNR include the eastern portions of Beltrami county, and all of Cass, Crow Wing, Hubbard, Itasca, Morrison, Todd and Wadena counties.

Under these restrictions, burning permits for brush or yard waste will not be permitted. No fireworks are allowed on public or private land outside city limits and campfires are allowed only in an established fire ring or pit.

"We had a dry fall last year, we had a very underwhelming winter as far snow goes and that’s continued through the spring," said Casey McCoy, the DNR wildfire prevention supervisor.

"The things that may not have caused a fire, you know someone has campfire in the backyard and walks inside without extinguishing it, without putting it out - most years it would likely go out on its own. This year it’s quite a bit different," he said.

According to the U.S. Drought Monitor’s latest information released Thursday, most of Minnesota is either classified as abnormally dry – or experiencing a moderate drought – with some areas classified as severe.

"Most of the time most years, we are done with fire season by about first of June, but this year we’ve remained dry and continues to be dry and elevated fire conditions," said McCoy.

He says so far this year, they’ve already documented 1,300 to 1,400 fires - numbers they don’t usually see until the end of the year.

"We’re at our average and we still have half the year to go," said McCoy.

According to the DNR, most of the southern part of the state is under a "high" fire risk with northern counties under a "very high" risk, even "extreme" to the west.

Western Wisconsin is also under high risk. McCoy says even with a bit of rain in the forecast, it will take a while for these conditions to change.

"We’ll need some sustained rain over several weeks, I think to come to the end of this," said McCoy.