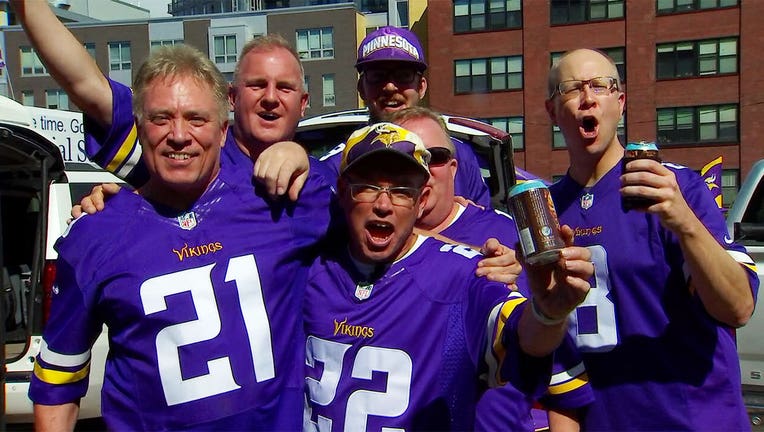 Vikings fans got to enjoy a win on Sunday for the first packed crowd at U.S. Bank Stadium since 2019. (FOX 9)

MINNEAPOLIS (FOX 9) - After opening U.S. Bank stadium earlier this year for a pre-season game, this is the first regular-season home game fans have been able to attend since 2019.

"It feels so good. It feels like you’re back home again," Vikings fan Brad Wieskus said while frying bacon on the grill at his tailgate.

After opening U.S. Bank stadium earlier this year for a pre-season game, this is the first regular-season home game fans have been able to attend since 2019.

Wieskus said last year, when they couldn’t attend the games because of COVID protocols, he and some friends he typically tailgates with would get together and watch the games on T.V. but it wasn’t the same as being at U.S. Bank Stadium in person.

Fan Ryan Pederson is showing off his recently renovated 12-passanger bus he bought this spring and renovated in time for the game.

"We’re just setting up for our inaugural tailgate session with the new bus," Pederson said.

Pederson dyes his beard purple, wears Viking-inspired leather armor and even paints his toes purple and gold with Vikings stickers to celebrate the season.

"I love the Vikings I love going to the games and I like to stand out," Pederson said. "Win or lose we’re here we’re here to have a good time."

For many dedicated fans who make the Vikings season part of their friend or family tradition, the 2021 home opener is a chance to reunite.

"All these people are friends of ours and some of them we haven’t seen for two years," fan Scott Naasz said.

Without fans allowed in the stadium and with restaurants limiting the number of guests or completely closed at times during last season, many fans didn’t visit Minneapolis to watch the game.

"It felt like half of my heart was gone last year, it really was," fan Josh Behnke said. "It feels like I can breathe again, let my hair out again, seeing old friends I haven’t seen in 11, 12 months."