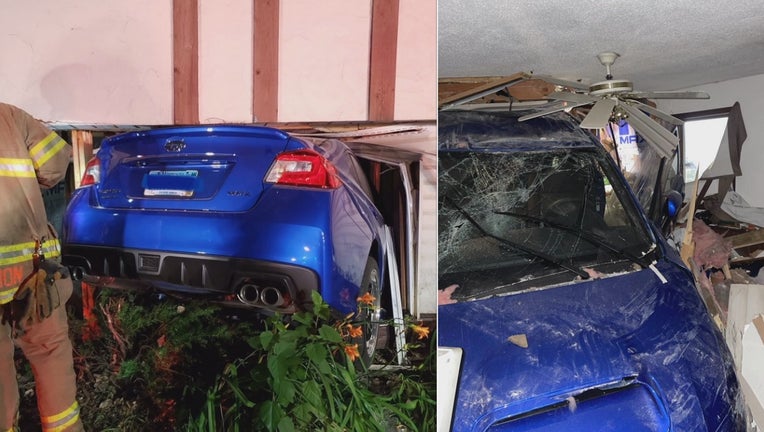 Neighbors say a man was attempting to learn how to drive stick shift. (Supplied)

ST. PAUL, Minn. (FOX 9) - On Thursday night in St. Paul, a family of eight lost their home when a car crashed into the corner of the structure.

Residents who live on the street say it was a neighbor who crashed into another neighbor’s house. His son has been teaching him how to drive a stick shift in a nearby parking lot, and neighbors believe the man may have mistaken the accelerator for the brake or clutch, causing the car to shoot through a fence and into Haylen Kubrom’s house.

On Thursday night in St. Paul, a family of eight lost their home of more than a decade when a car crashed into the corner of the structure.

"I don’t know where to go. We have one garbage bag that we could salvage... I lost everything," Kubrom told FOX 9 on Saturday.

Kubrom’s house on Arlington Avenue was dealt a devastating blow by the Subaru sedan. "What sounded like almost an atomic bomb, and then the house just rumbled," Kubrom explained.

After the dust settled, the family realized the car had left a hole in their home’s bottom level. It happened around 10 p.m., and Haylen’s 18-year-old daughter Savannah had just gone to bed, when the car came through her bedroom window.

"My daughter, I couldn’t get to her, I didn’t know if she was dead," Kubrom said. After the crash, Savannah was trapped underneath the rubble.

"She’s screaming for help, and she could see the tires literally right above her head," Kubrom said. "It’s almost like by the grace of God she didn’t die, because everything in the lower area was smacked all the way to the back of the house."

The car just missed the home’s gas line, but it connected with a water pipe, causing widespread water damage. Thankfully, 10 people inside walked out alive.

"She has PTSD from this. She can’t sleep at night, she’s nerve-racked. She almost thought she lost her life," Kubrom said. "I can’t get her to sleep, she barely eats, she’s just stuck in one room by herself, family can’t even talk to her."

The family was forced to leave their home on Thursday night, because it’s been condemned. Now they are staying at an aunt’s home, and they’ve created this GoFundMe page, asking for support during this challenging time.