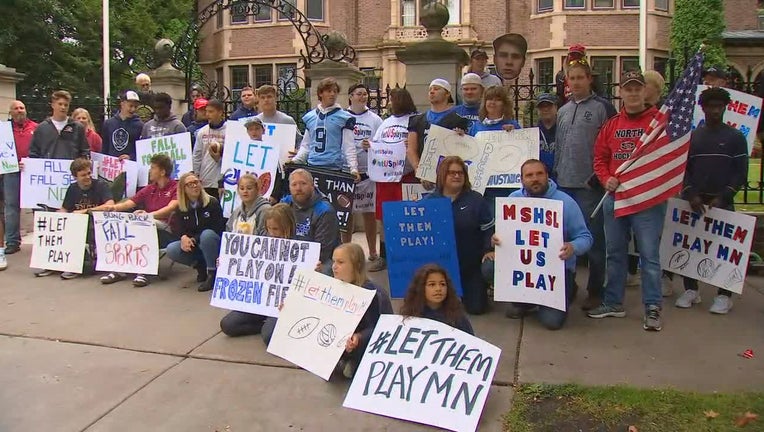 Players and their parents are hoping state leaders will reconsider the decision to postpone some fall sports. (FOX 9)

ST. PAUL, Minn. (FOX 9) - A group of high school athletes, along with family members and other supporters, gathered Saturday to push the governor to reconsider restrictions on fall sports.

"I also miss the crowds and everyone cheering for us on Friday nights," said Becker senior Mitchell Louden.

A group of high school athletes along with family members and other supporters gathered Saturday to push the governor to reconsider restrictions on fall sports.

Due to precautions for COVID-19, those familiar games under the Friday Night Lights aren't happening.

"It was just kind of heartbreaking because the fall is football season," added Louden.

Saturday, instead of competing against one another, the players came together for a common purpose.

These players and their families are hoping to get some attention from the governor for their cause, holding a protest outside his residence.

"For a lot of people, this is mental health, too, and it’s keeping a lot of people on the right track and keeping them focused," explained Dassel-Cokato junior Gregory Clark.

They’re hoping to persuade the Minnesota State High School League to allow football games now instead of waiting until spring.

"If we start in March, the likelihood of there will be snow, frozen ground in March and April is still really high, and then you’ll have no season," argued football mom Dawn Gillman who organized the rally.

The MSHSL has a workshop meeting on Tuesday and while they have made clear no action will be taken until their October 1 board meeting, they are expected to talk about fall activities telling FOX 9 they continue to review past decisions and prepare for new decisions if they are needed.

People at the rally are hoping for just that: A new decision on fall sports.

"There’s a lot of frustration," said Ryan Wassink of Stillwater. "What is going to be different in the spring? Could be in the exact same environment."