For generations, African American parents have been warning their children about the potential dangers of being black in America.

(FOX 9) - For generations, African American parents have been warning their children about the potential dangers of being black in America.

With Black History Month starting Monday, this week's Voices for Change takes a look at what one local professor calls "a grim rite of passage."

Like most parents, Tim Williams says it’s his job to prepare his kids for life in the real world.

But as an African American father, he says it's also important to lay all his cards on the table when it comes to teaching them how to handle encounters with police.

"It's just necessary. It's part of raising my kids," he explains. "It goes right along with don't drink and drive."

So far, Williams says his 6-year-old T.J. has mostly seen police in a positive light. "Where we live in Champlin, we've been riding bikes and a police officer pulled him over. Put his lights on and gave him a sticker to say congratulations for wearing your helmet. Those interactions have been positive."

But as he gets older, Williams says he'll have to explain to his son that some interactions with law enforcement could be far more dangerous.

"In the blink of an eye, it can all go wrong," said Williams. "It's been proven time and time again. We've all seen it happen. Something as simple as a traffic stop can go wrong... So I think it's very important I prepare you for this as much as I prepare you to not talk to strangers."

The death of George Floyd at the hands of four Minneapolis police officers prompted many black parents to have "the talk" with their children, particularly but exclusively with their sons.

But this talk isn't about the birds and bees. It's about how to act if they have a run-in with police.

"The talk is this grim rite of passage that African Americans in particular but most people of color understand given the history of violent encounters between police and African Americans," said Williams.

Dr. Yohuru Williams is a distinguished chair and professor of history at the University of St. Thomas.

He says "the talk" goes back to the murder of Emmett Till, a 14-year-old boy who was lynched after being accused of offending a white woman in her family's grocery store in Mississippi in 1955.

The woman's husband and his half-brother were acquitted in Till's murder. But tens of thousands of people viewed his badly beaten body in an open casket, prompting his death to become a rallying cry for the civil rights movement.

"The idea is that the normal routine, circumstances that other people take for granted, often turn into deadly encounters for African Americans," Dr. Williams explained. "So this idea you want your child to come home at the end of the day. But it's recognizing that the routine is not routine when you have dark skin."

Dr. Williams says the talk is usually given by a parent, older sibling, or trusted elder to a young person of color about how to behave with police.

It often includes instructions like keeping their hands in plain view, saying "yes sir or yes ma’am," and don't talk back or make any sudden movements that could cause the officer to escalate the situation.

"I had a white gentleman say to me after this happened, I don't understand what's so special about the talk," said Dr. Williams. "I have this same conversation with my child about how they should behave and they should of course be respectful to police. I said the difference is the body count. The difference is the video. Your child doesn't face the same danger."

Podcaster and radio talk show host Sheletta Brundidge says she has been having "the talk" with her kids since they were three years old. 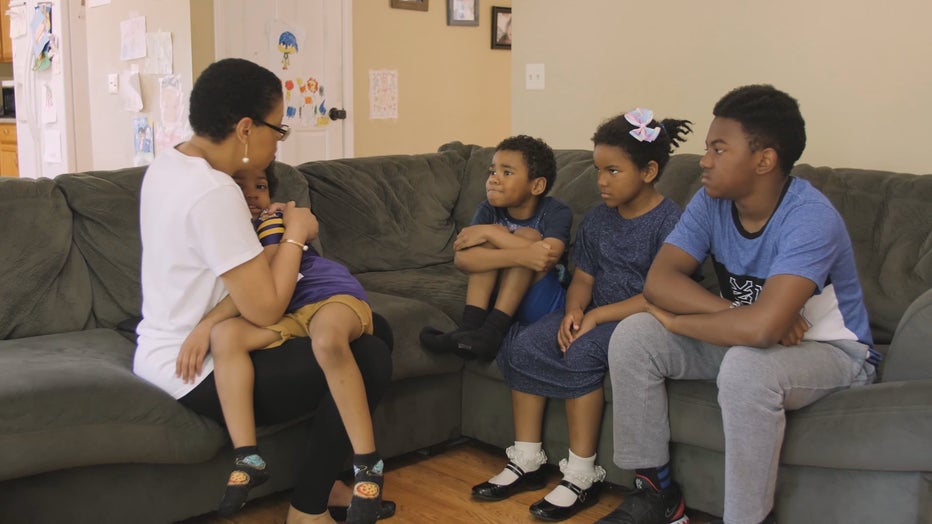 Sheletta Brundidge, like many Black parents, has had to have the difficult conversation with their kids about how to deal with police. (FOX 9)

She says when she brought up the subject again after Floyd's death, it took hours to talk the oldest of her three boys out of a tree he had climbed because he thought it was the only place he would be safe from police.

"We don't want anything to happen to our boys," explained Brundidge. "We don't want them to be under the assumption they have the same rights as their white friends and classmates. No, you cannot talk back. You cannot demand badge numbers. No, you cannot plead your case. Those opportunities are not afforded to you based on the color of your skin. Based on the country you live in."

Tim Williams says having "the talk" with his kids is a life lesson they have to learn because that is the hand they've all been dealt. "I'm okay having the conversation because it makes me feel better. I feel like I said it. I told you. We talked about it. We've explained why. I want to be the person to control as much as I can for my children to put them in the best situation as possible."