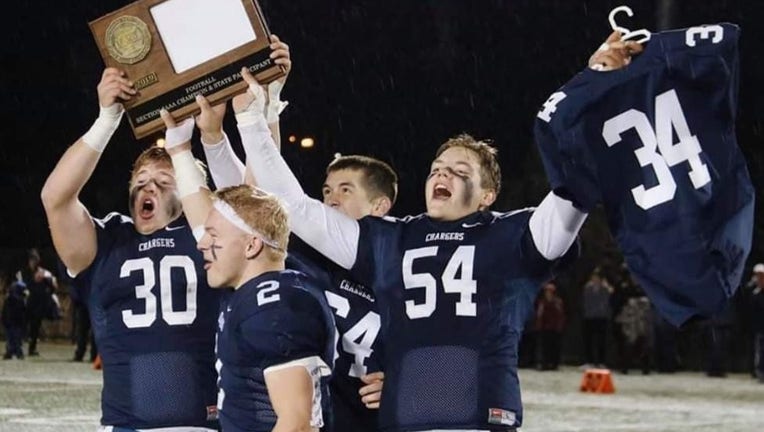 Dassel-Cokato football players celebrate a playoff win along with the jersey of their fallen teammate.

COKATO, Minn. (FOX 9) - It has been 46 years since Dassel-Cokato High School made the Minnesota state football championship tournament. Now that they’re in, their goal now is to add more hardware to the trophy case. They’re hoping to make history, but also do it in honor of a teammate, who passed away.

Friday, the Chargers arrived in the gymnasium, practically conquering heroes, having accomplished something that hasn’t been done at the school since President Richard Nixon was in the White House.

Dassel-Cokato High School’s football team is hoping to make history, but also do it in honor of a fallen teammate.

Dassel-Cokato finally broke through with a sectional title over Providence Academy last weekend. The Chargers are not only winning for themselves, but for a fallen teammate Jacob MacDonald, who wore no. 34. His spirit and jersey were there as the boys accepted their championship trophy.

“It goes everywhere with us,” said Jackson Martin, a Dassel-Cokato High School football captain. “Just keep him as close to the team as we can - how close we know he is.”

MacDonald is still considered a team captain. Tragically, the star three-sport athlete died a couple years ago during his sophomore year from a freak peanut allergy episode that devastated the entire school community.

“He’s like a brother to us, he’s gonna stick with us the whole way there,” said DeBoer. “Starting and ending with us.”

For DeBoer and the other seniors who grew up with MacDonald, they want so desperately to keep their journey alive beyond this weekend. They believe this is about so much more than just football - it’s a mission they call MacDonStrong. And Dassel-Cokato is all in.

The Chargers’ next opponent is Cannon Falls. Their game is Saturday at noon. If they win, the team’s next stop would be the final at U.S. Bank Stadium.