Both candidates came to FarmFest, southwest Minnesota's yearly celebration of all things agriculture, armed with talking points to support their strategy in Wednesday's debate. But some of their biggest punches included claims that need clarification.

Jensen repeatedly said the Walz administration was hurting the Minnesota economy by placing burdens on businesses. State government should lessen regulations on land use, childcare programs, and industry, he said.

"We haven't had a major Fortune 500 company come to Minnesota since 2004, and that was Mosaic, and they have since left. We need to get government out of the way and unleash ourselves," Jensen said. "Minnesota has a hostile attitude toward business and we've got to change it." 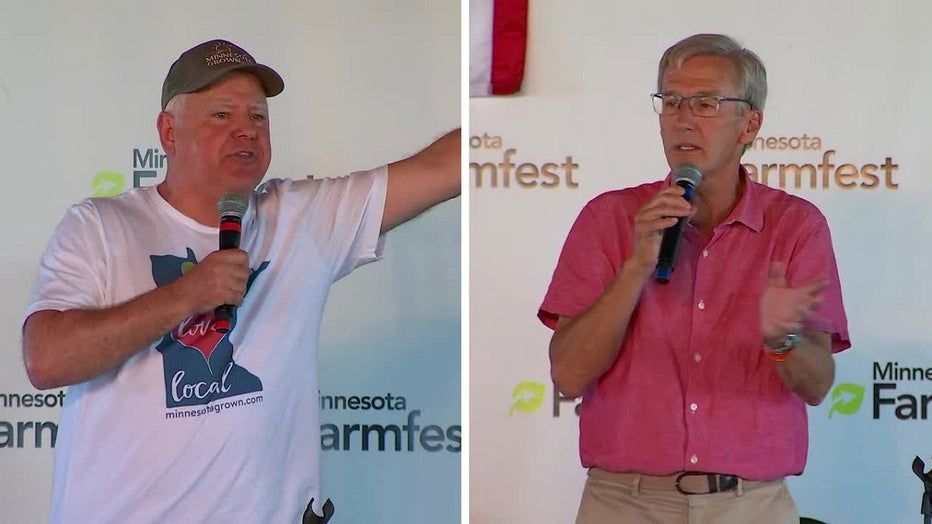 Forbes considered Minnesota the 15th best state for business in its most recent 2019 rankings that account for costs and regulations, growth potential, labor supply, and quality of life. This year, CNBC ranked Minnesota as the ninth-best using similar metrics.

But Minnesota fares worse in a narrower category: business taxes. The Tax Foundation, a research group that leans conservative, ranked the state 45th-best in its most recent rankings of the tax climate.

It's true that Minnesota hasn't attracted a Fortune 500 headquarters in a long time -- much longer than Jensen claimed, because Mosaic was formed when Wayzata-based Cargill, Inc. spun off its crop nutrition division in 2004. Most of Minnesota's biggest companies are homegrown.

However, two members of the Fortune 1000 have relocated to Minnesota in recent years: recreational vehicle maker Winnebago moved from Iowa to Eden Prairie this year, while firearms and ammunition manufacturer Vista Outdoor moved to Anoka from Utah in 2018.

Walz positioned himself as an experienced leader who's faced tough issues, but one of his biggest talking points also needs more context.

"The real issue is that in my administration we’ve cut taxes more than any time in the last 25 years," Walz said. "We proposed this year and agreed to the largest tax cut in state history. These are reality."

Walz didn't propose the largest tax cut in state history during this year's legislative session. He did agree to an end-of-session budget deal that included $4 billion in tax breaks, which key lawmakers in both parties considered the biggest tax cut ever. It included the elimination of state taxes on Social Security income and additional breaks for renters.

Just one problem: the Legislature failed to pass it before lawmakers adjourned in May.

Walz has proposed increasingly larger rebate checks this year. He started at $175 per adult, then bumped that up to $500. The checks failed to win support from either party in the Legislature. After the session ended, Walz increased his proposal to $1,000 per adult and earned the support of key Democrats.

Republicans who control the Senate still oppose the rebates -- and a special session required to pass them. The GOP favors permanent income tax cuts instead.