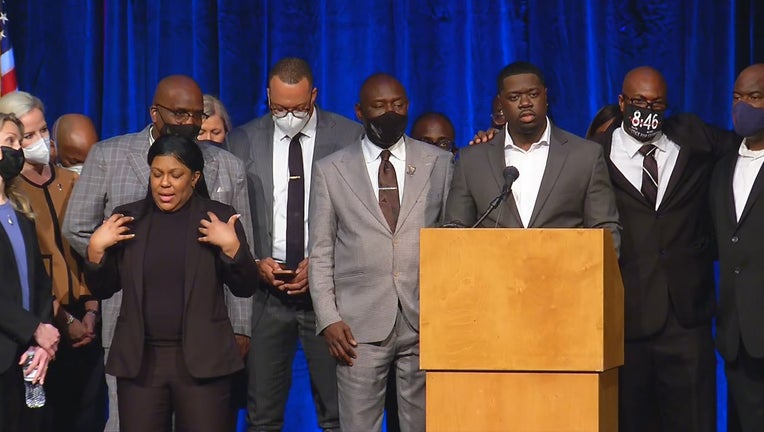 George Floyd's family will be awarded $27 million from the City of Minneapolis. (FOX 9)

MINNEAPOLIS (FOX 9) - The City of Minneapolis will pay out $27 million to the family of George Floyd after his death in police custody last year.

City leaders announced the record settlement on Friday, with all City Council members voting to approve the money to settle the civil suit brought by the family.

The City of Minneapolis will pay out $27 million to the family of George Floyd after his death in police custody last year.

However, the timing of the decision by councilmembers is raising some eyebrows, with some experts wondering how this could impact the trial of the former officer charged in Floyd's death. Jury selection is currently underway in the trial of Derek Chauvin.

"Obviously, that’s a very large amount of money and this is an incredibly significant case," said University of St. Thomas Associate Professor of Law Rachel Moran.

The $27 million tops the $20 million paid out by the City of Minneapolis to the family of Justine Damond, who was killed by a Minneapolis police officer in 2017.

"The city has prioritized making sure we have enough in reserves, so while our self-insurance fund doesn’t have adequate money right now, we do have other reserves that we have set aside for these types of liabilities," explained Minneapolis City Coordinator Mark Ruff.

Lawyers we spoke with say they’re surprised the settlement was announced Friday, as the criminal trial against former Minneapolis police officer Derek Chauvin is still in motion.

"It makes me wonder if the city is trying to make a statement with the timing of the settlement," said Moran.

Moran also believes it will be nearly impossible that the jurors chosen won’t know the settlement was reached.

"The reality is this is a widely talked about event and they are in Hennepin County, living their lives and so it would be challenging not to hear any information," said Moran.

Attorney Mike Bryant argues if it does get brought up during the trial, both sides may try to use the settlement sum in their favor. "One side can argue that the city has decided these cops clearly did something wrong and that’s why we’re paying the money we are. And alternatively it looks like to some people it’s just about money."

From the settlement money, the family is pledging $500,000 to help businesses in the area of 38th and Chicago in Minneapolis that have struggled during unrest that has followed Floyd's death, on top of the impacts of the pandemic.