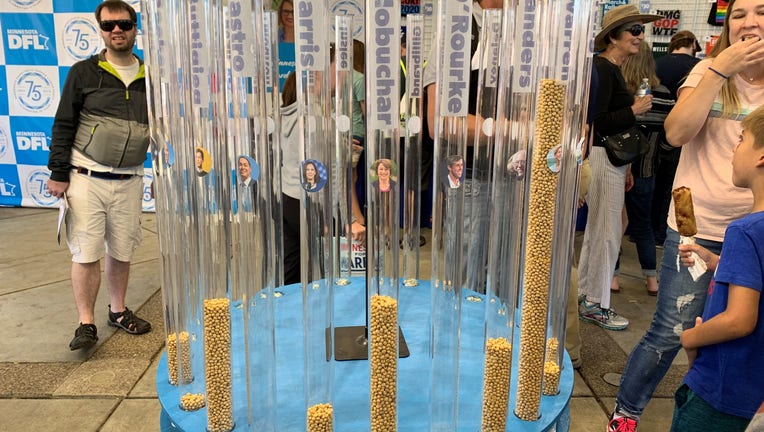 A "bean ballot" of the Democratic presidential candidates was held at the Minnesota State Fair. (Theo Keith / FOX 9)

FALCON HEIGHTS, Minn. - Democratic presidential candidate Elizabeth Warren won the Minnesota DFL’s state fair “bean ballot” straw poll, which – while unofficial – is being viewed by officials in both parties as worth more than a hill of beans.

Warren won 38 percent of the vote, doubling up anyone else over the 12-day contest. Amy Klobuchar finished a distant second at her home-state fair, getting 16 percent. Pete Buttigieg got 14 percent. Joe Biden, who is the frontrunner in almost every official poll, finished in sixth place.

More than 15,000 fairgoers voted, and party staffers tallied the results by weighing the soybeans that each candidate received, a spokesman said.

“What it shows is that there’s great enthusiasm for all of our candidates, quite frankly,” DFL Chairman Ken Martin said in an interview.

Martin defended Klobuchar’s showing in the poll, noting that she has traditionally received votes from independents and Republicans in Minnesota who would be unlikely to come to the DFL’s booth to cast a bean ballot.

“There’s no doubt in my mind that if our primary were tomorrow, Amy Klobuchar would win that primary,” Martin said. Of course, our primary is not until March 3, Super Tuesday. There’s a long time between now and then.”

Minnesota will be a battleground state in 2020

Minnesota will be a battleground state in 2020 and the Trump campaign is sending in the troops.

Klobuchar has struggled to gain traction in the Democratic primary. She has qualified for the September 12 debate, but will stand on the end of the stage, with the frontrunners earning center-stage positions.

Republicans took a jab at Klobuchar, saying the poll results show she has “no momentum” in her home state. The Minnesota GOP also took note of Warren’s landslide victory.

“I think it shows how progressive and far left that their party is going for this next presidential election,” GOP Chairwoman Jennifer Carnahan said. “And I think that’s a big gift to Republicans, not only in Minnesota, but all over the country.”

Klobuchar campaigned at the fair on its opening day, Aug. 22, when she compared herself to a wild-card NFL playoff team and noted that several such teams have gone on to win the Super Bowl.

Bernie Sanders, who stopped at the fair on Aug. 24 for a radio interview, finished in fourth place in the straw poll with 14 percent. He won Minnesota’s Democratic caucus in 2016 over eventual nominee Hillary Clinton.

Warren’s visit to St. Paul days before the state fair opened – when she drew several thousand people at a Macalester College rally – was a precursor to her poll results.

Both Democratic and Republican leaders said they are convincing national party leaders to put the spotlight on Minnesota in 2020.

Martin said he is lobbying the Democratic National Committee to hold a presidential primary debate here. The Sept. 12 debate will be in Houston, while Democrats have awarded their October debate to Ohio.

No Republican presidential candidate has won Minnesota since 1972, but President Donald Trump came close in 2016 and has said he plans to focus on the state.

“We’re right at ground zero here and I certainly hope we can get a debate here,” Martin said. “The response (from the DNC) is, we haven’t made those decisions that far out, wait and see.”

Martin said the DNC made the “right decision” to impose tougher criteria on candidates for the third debate, effectively cutting the field in half. Ten candidates made the cut, earning 2 percent in four qualified polls and getting contributions from 130,000 individual donors.

The Trump campaign has already sent several field staffers to Minnesota ahead of the 2020 campaign, Carnahan said. She said state Republicans now have 15-20 staffers in the field, a mix between Trump campaign staff and Minnesota GOP employees.

“It’s more staff than we’ve probably had in the state in modern times,” Carnahan said. “We’re very excited about it.”

Carnahan said she makes the point “all the time” to national party officials that Minnesota will play a pivotal role in 2020.

“Minnesota delivering the 10 electoral votes to the president would make very clear the path to 270,” she said.