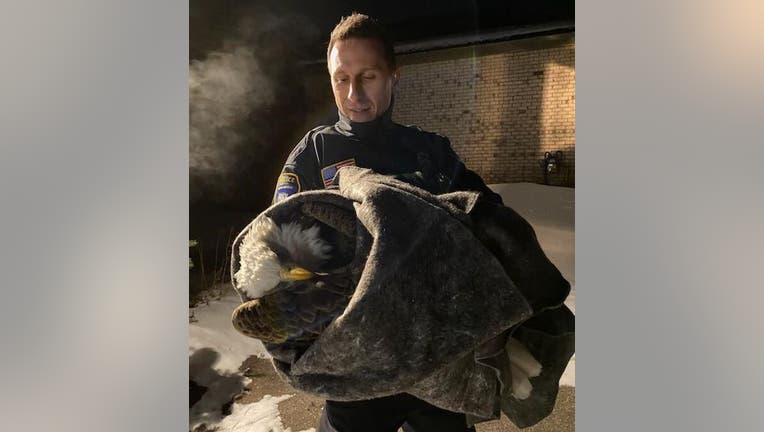 Eden Prairie police officers rescued an injured bald eagle after it was found in a backyard. (Eden Prairie Police Department)

EDEN PRAIRIE, Minn. (FOX 9) - A bald eagle is on the mend after Eden Prairie police officers rescued it during the bitter cold snap last week, according to the Eden Prairie Police Department.

Officers responded to a home on Feb. 16 after the resident found the injured eagle in their backyard. The bird apparently had fallen after fighting another eagle in the air.

Due to the extreme cold, the officers had to act quickly. After wrapping the bird in a thick blanket and securing it in a cardboard box, they were able to bring the eagle to the Animal Emergency and Referral Center of Minnesota in Oakdale.

While the center does not typically treat raptors, staff was able to treat the injured eagle for its pain overnight. The next day, the eagle was transferred to the University of Minnesota's Raptor Center, where it got a blood transfusion.

According to Eden Prairie police, the Raptor Center hopes to release the bird back to the wild soon.