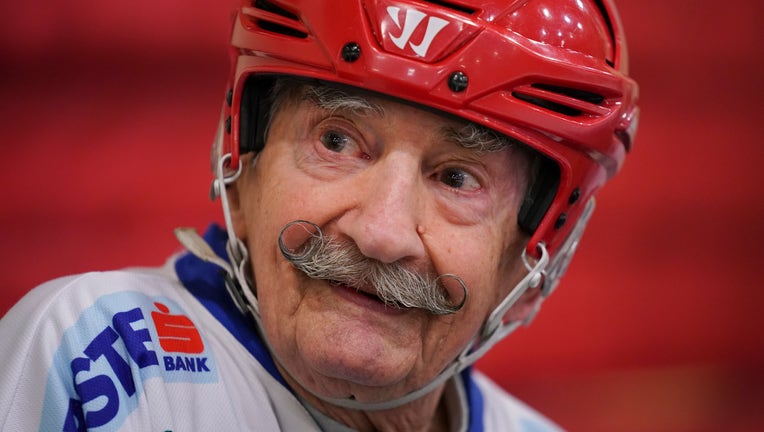 DULUTH, MN - MAY 16: Mark Sertich on the bench between shifts during his morning hockey game. On the same morning that 97 year-old Mark Sertich was to be honored with induction into the Duluth Entertainment Convention Center's Athletic Hall of Fame,

“His popularity he has is just amazing. Everyone that meets him just instantly likes him and they admire him. I used to go places with him and kind of be in his shadow and just listen to the people talk and everywhere we go, someone would say ‘you’re that guy who plays hockey.’ And he’s had that handlebar mustache that you couldn’t miss,” Sertie’s longtime friend Dane Youngblom said.

At the age of 95, Sertich became the Guinness World Record-holder for oldest hockey player in the world. He continued to break that every year, as he skated at the Essentia Heritage Center two to three times a week up until his death. Sertich was also inducted into the DECC Athletic Hall of Fame in 2019. He was a 1939 Denfeld graduate.

Sertich was also a World War II Veteran and became good friends with the Duluth Firefighters. On his 80th birthday, the firefighters he plays with gave him a lifetime membership at the Heritage Center and waived the $5 daily fee.

“He sat next to me in the locker room every day for 30 years. We just talked back and fourth and yacked about stuff. So there’s just going to be an empty spot there on the bench and I’m going to miss him,” Youngblom added.

Sertich died peacefully at home surrounded by family on Monday morning. He was 99 years old.