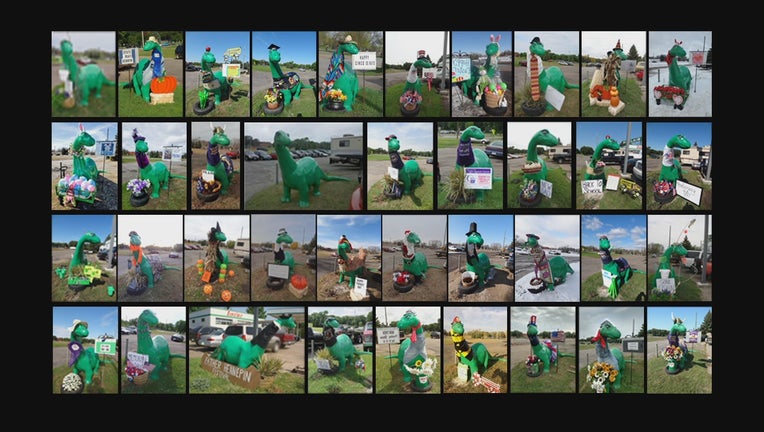 Dino the Dinosaur at the Sinclair gas station in Champlin has a large wardrobe of costumes.

CHAMPLIN, Minn. (FOX 9) - Pulling in to Champlin Sinclair is like taking a step back in time. The full-service gas station may old school, but its mascot is positively prehistoric.

"Spring came and he just got a wash and wax job so he's looking very pretty for Mother's Day," said Diana Merkl, the office manager at Champlin Sinclair.

A gas station in the north Twin Cities metro has become a popular roadside attraction thanks to a sharply dressed dinosaur.

Dino the Dinosaur, Merkl affectionately calls him, has been out in front for about 20 years. Every other week or so, Merkl dresses him in a colorful costume to celebrate the season.

"I just like making people smile and if it’s something that will bring a smile to someone's face when they are driving by or they will pull in with their kids for their kids to take a picture in front of it’s a happy day," said Merkl.

Merkl started outfitting Dino one cold winter when she knit him a scarf to keep him warm. Since then she's come up with about 100 different ways to decorate her dinosaur, depending on the time of year from Easter to the Fourth of July to Halloween to New Year's. 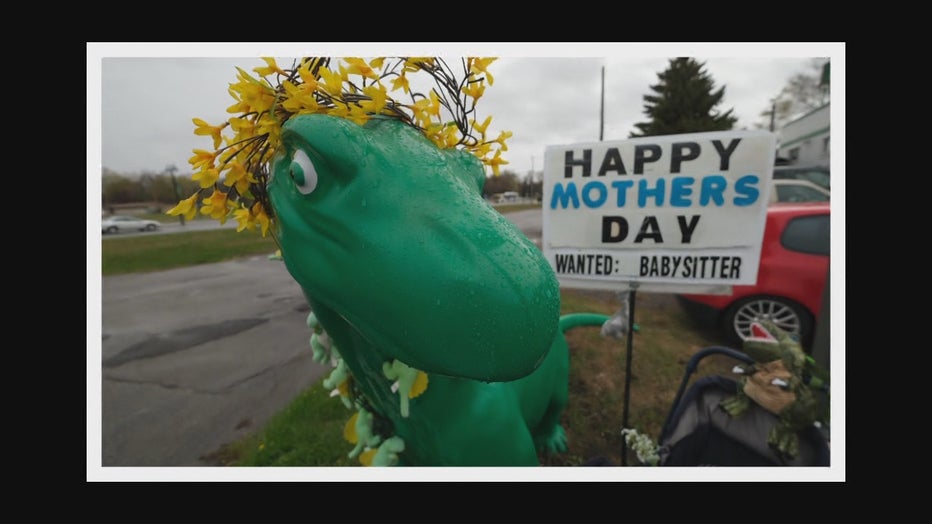 Dino the Dinosaur at the Sinclair gas station in Champlin, Minnesota at a special costume for every day of the year.

Around Christmas, kids can leave letters to Santa in a mailbox, which Dino promises to pass on when jolly Old St. Nick stops by.

"I've had kids ask for food which rips my heart out and I've had kids ask for their family member to come home and be with them and then I have had one with a five-page single-spaced list of all the toys they wanted," said Merkl. "Usually my answer is I'll see what's in the bag when I get to your house."

Dino's outrageous ensembles run the gamut from presidential to princely. Whether he's rooting for his favorite sports team, getting ready for Mardi Gras or setting his sights on hunting season, Merkl makes sure Dino is always decked out. 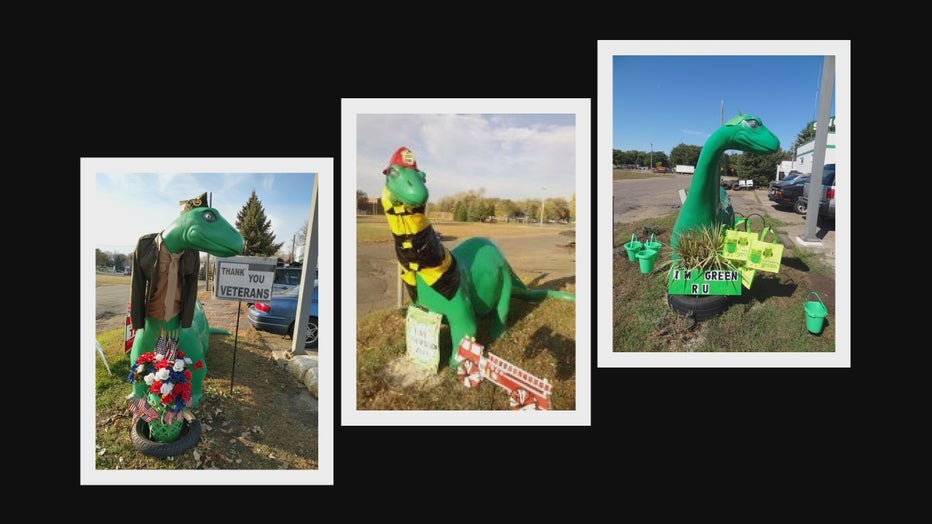 Dino the Dinosaur at the Sinclair gas station in Champlin, Minnesota at a special costume for every day of the year. (Diana Merkl)

Dino even has a calendar of costumes, which Merkl sells to raise money for the American Cancer Society because of her own battle with non-Hodgkin’s lymphoma. She's been in remission for 30 years.

"Dino has to earn his keep around here and raise money also," said Merkl.

Dinosaurs have always loomed large in pop culture from "The Flintstones" to Saturday morning TV shows.

A green brontosaurus became an iconic image for Sinclair gas stations in the ‘30s with fiberglass versions like Dino appearing at gas stations across the country decades later. 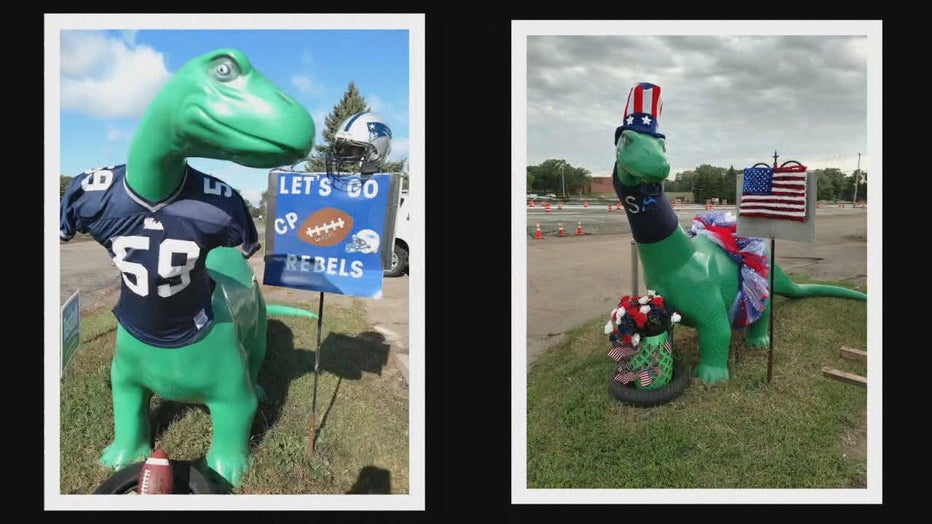 Dino the Dinosaur at the Sinclair gas station in Champlin, Minnesota at a special costume for every day of the year. (Diana Merkl)

"He's an attraction," said Barbara Klein of Dayton, Minnesota. "Everybody loves him. They come up here and go, ‘Oh look he's all dressed up’ for whatever occasion it is. Easter. Christmas. Thanksgiving. They are always up here. He definitely pulls people in."

Customers in Champlin say Dino has become a local landmark with people driving in from miles around to get their fill.

"I couldn't imagine Champlin without him," said Danielle Harris, a customer. "He is definitely a local landmark. We love Dino. We've been coming to see Dino since they were babies. It's something to do. when you are in the car ride. Everyone knows Dino and everyone loves Dino."

Dino's wardrobe seems to be as endless as Merkl's creativity and she has no plans for either to go extinct quite yet.