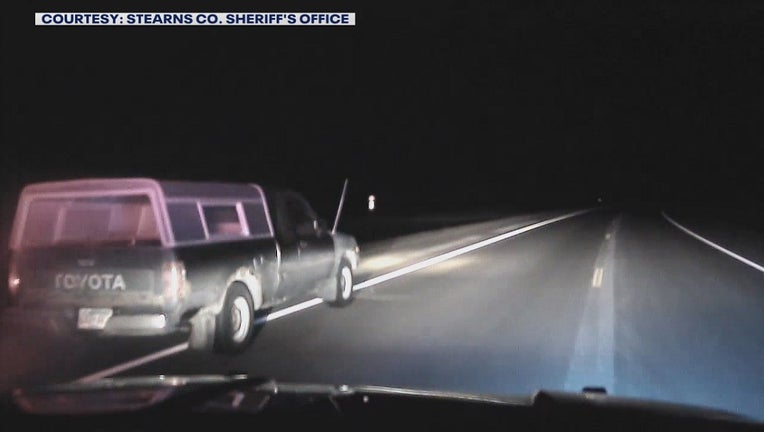 ST. CLOUD, Minn. (FOX 9) - From drunk driving to speeding, Stearns County deputies see a lot of crazy things when they're out on the road. But what happened last week on Highway 55 was shocking to even veterans of the department.

Stearns County Deputy Matt Mayers heard the call come in just before 7 p.m. last Wednesday, informing him that a driver had blown through a stop sign getting on to Highway 55 just west of Paynesville.

From drunk driving to speeding, Stearns County deputies see a lot of crazy things when they're out on the road. But what happened last week on Highway 55 was shocking to even veterans of the department.

He turned on his lights and sirens, but the truck still didn't stop. For the next 2 1/2 miles, the driver weaved back and forth between lanes, even going in and out of a ditch at one point.

Since speeds were slow, Deputy Mayers was able to perform a PIT maneuver. He finally stopped the driver, a diabetic man who was suffering from a medical emergency.

Captain Jon Lentz has been with the Stearns County Sheriff's Office for more than 30 years and has never seen anything quite like this.

The actions of the driver can be explained in hindsight. After the incident, they were taken to the hospital to get the care they needed and are doing OK.

Stearns County has a strict pursuit policy, only allowing chases if it involves a felony level crime or an impaired driver, by drugs or alcohol or a medical condition.

In this case, Lentz tells Fox 9 that Deputy Mayer's actions may have saved the life of that driver and those who were sharing the road with him that night.

"Pursuits can be dangerous; they can be unsafe...if we have to engage in a pursuit, he followed all the steps we want a deputy to follow," said Lentz.

Both cars involved in did suffer some minor damage, but no one was hurt in the incident.