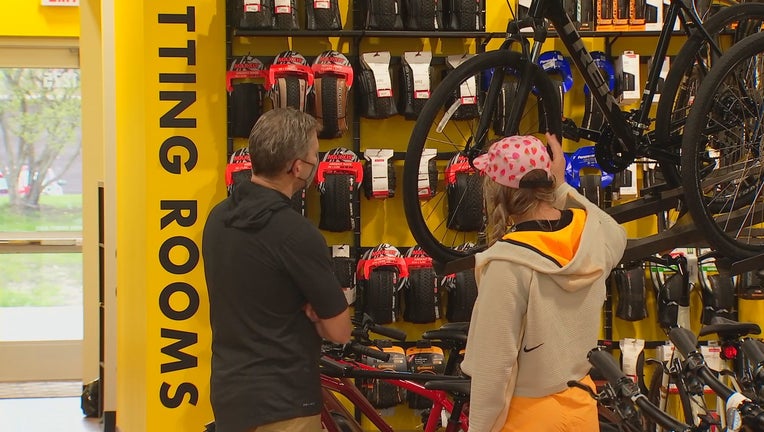 After a spike in business last year, as many people sought outdoor activities during the pandemic, bike shops say they are still seeing a high demand for products. (FOX 9)

(FOX 9) - Bike shop owners say the demand they have seen over the last year is unprecedented, and not showing any signs of letting up. That’s because, while the pandemic has forced many people indoors, it’s forced other to look for new ways to get outdoors.

"It’s just about one of the only things you can do now with everything being shut down from COVID and everything," Doug said.

Bike shop owners say the demand they have seen over the last year is unprecedented, and not showing any signs of letting up. That’s because, while the pandemic has forced many people indoors, it’s forced other to look for new ways to get outdoors.

Doug and his son Sam get out for a ride a couple times a week, sometimes at Eagan’s Lebanon Hills Regional Park.

"I really started right when the whole pandemic really hit and I kind of look out now and there’s probably twice as many people," Sam said.

"There’s a lot of people back there and everybody’s having a good time," bicyclist Jeff Olson added.

"They’re bored because they’ve been sitting at home for a while," Eagan’s Free Wheel Bike service manager Jason Joseph said.

The rush to get outside is being felt inside area bike shops, including at Joseph’s shop.

"Insanity… insanity is the only word I can use to describe it," Jason Joseph said. "It’s like everyone decided they wanted to start riding bikes."

"It’s hard to even buy a bike at a bike store now," Olson said.

Joseph says he’s been in the business for 33 years and has never seen anything like this, business up between 70% and 100% in the last year.

"The lulls are gone, and the second you open up usually there’s even people waiting at the door before you even open," Joseph said. "Sometimes it’s two hours before we open and people are looking in the windows and stuff."

Now the only thing putting the brakes on bicyclists has been supply.

"If you ordered one now and you put the money down it’ll be a year before you get the bicycle," Joseph said, depending on the bicycle make and model. Because of that, repairs on old bikes are up just as much, with bike shops saying if you can find a bike that you want, buy it before it’s too late.