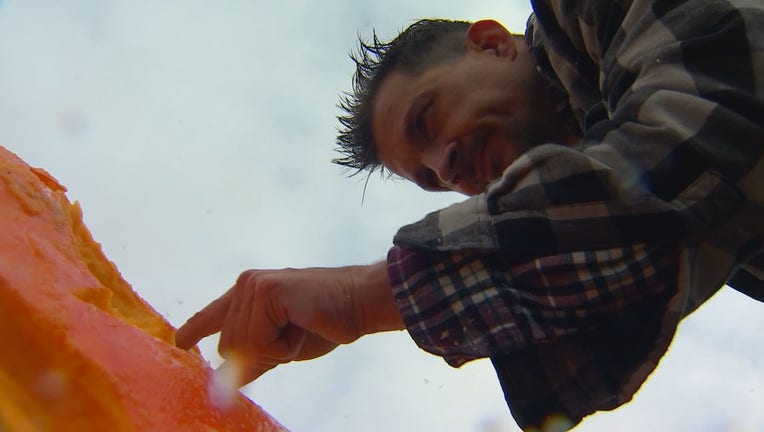 SHAKOPEE, Minn. (FOX 9) - A Shakopee dad is the envy of the neighborhood with his giant-sized pumpkin carvings.

The man, Mark Wilkerson, brought Slimer from Ghostbusters and a T-Rex to life through hours of hard work and fine precision.

“It’s always a learning experience, every year, I try to do something bigger and better every year,” said Wilkerson.

It is wet, messy and time consuming, and yet when the calendar flips to October, it’s exactly where Wilkerson wants to be.

In his Shakopee driveway with his monster pumpkins, Wilkerson admitted that it’s not your typical hobby.

“The neighbors enjoy it too. They know I’m a little crazy, but they know the giant pumpkins are coming every time October comes around.”

Wilkerson said when he was younger and working in the restaurant industry, he learned a few ice carving tricks from an executive chef.

He was a natural with your more average-sized pumpkins. His son, Noah, ate up each one, so they kept getting bigger and bigger.

Now, the pumpkins weigh in at more than 600 pounds.

“It definitely takes a while,” Wilkerson said. “It’s very fun in the beginning and very fun at the end when it gets close to done, but I’d say on average, one of these takes between nine and 10 hours for each one.”

The creativity is off the charts with a face, a rose, a panda and even a viking, but his favorite is still the T-Rex.

He has a pumpkin guy up in Dayton, Minnesota who grows the oversized gourds and has them delivered. He sizes up each one and, based on shape, he lets his imagination and carving skills run wild.

“It’s kinda dictated by the pumpkin,” Wilkerson. “This one, when I first saw it, it was flat and kinda round, obviously most pumpkins are. It screamed 'rose' to me, because it was even on all sides. It was pretty good.”

In the year of the pandemic, Wilkerson hopes Slimer from "Ghostbusters" brings a lot of joy and happiness to his son and their entire neighborhood that anxiously awaits the latest Halloween-time masterpiece.

“My hope is with all the bad things 2020 has brought, at least this brings a smile to the kids’ face. Sometimes, you feel like it’s too much work, but when you see the finished product and the kids are coming over and seeing their excited faces, that makes it all worth it,” Wilkerson added.

He is already looking forward to next year. Wilkerson told FOX 9 he wants to stop wasting so much of the pumpkin, too. He plans to go for more depth and more detail. His dream is a three-dimensional re-creation of the Roman Coliseum.