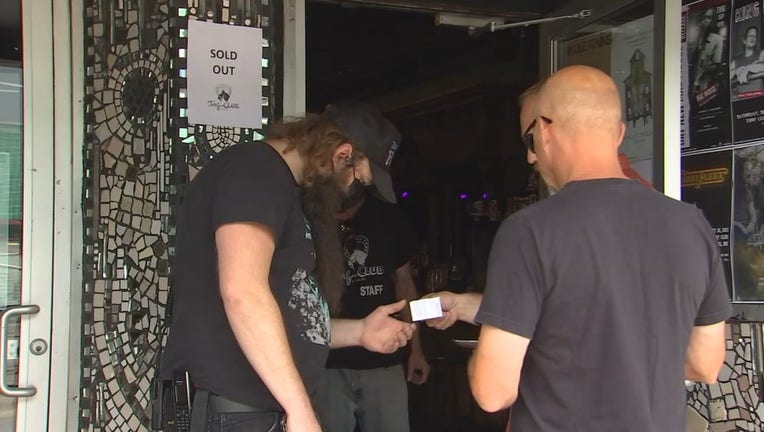 An attendant checks the proof of COVID-19 vaccination required for entry at the Turf Club in St. Paul, Minnesota. (FOX 9)

At the Turf Club in St. Paul, concertgoers pulled out their proof of COVID-19 vaccination to enter the show. The venue also accepted proof of a negative COVID-19 test.

A vaccine mandate for First Avenue and other concert venues it owns took effect on Wednesday.

"Everybody in here is going to be safe," said one patron. "It doesn’t bother me none and hopefully it convinces some other people that its time."

First Avenue, which owns the Turf Club along with the Fine Line, Palace Theatre and the Fitzgerald Theater, announced this week that after re-opening a month ago they were adding this extra safety protocol at all five of its venues.

"This is a way for us to keep our doors open and keep people coming in," Ashley Ryan of First Avenue told FOX 9 this week.

For the most part, patrons seemed unbothered by it.

"I guess if we need to take that precaution, it’s a good thing to do," said another concert goer. "If I get to still go in there, it’s whatever."

FOX 9 spoke with an unvaccinated concertgoer who presented negative COVID-19 test results to get inside. He told FOX 9 he now plans to get the vaccine rather than deal with the hassle of getting a test again before another show.

Outdoor music festival Lollapalooza was the first major event to try this requirement and while some find it overbearing, doctors say it should work.

"I think it is effective," said Dr. Cameron Berg, an emergency room physician at North Memorial Health Hospital. "I think it will reduce the transmission of some cases."

First Avenue says you do not need to bring the physical vaccination card to the venue, it will accept a photo on your phone. If you are doing a test instead, the test must be performed within 72 hours of the show.

"I had a feeling that eventually it was going to come to this," said one person. "There would be enough people that weren’t going to do it and we’d be in this situation."