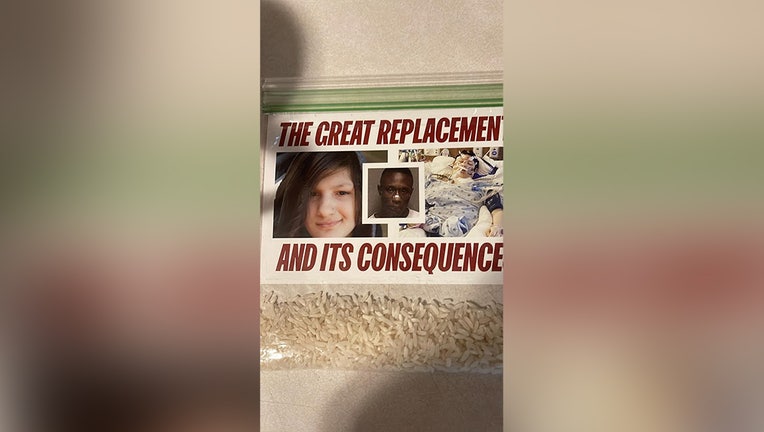 The flyers left in driveways across in the East Metro over the least several days advanced a version of the racists "Great Replacement" conspiracy theory.

COTTAGE GROVE, Minn. (Fox 9) - The Cottage Grove Police department is asking for the public's help to identify members of a white supremacist group who distributed hate propaganda flyers in driveways in the East Metro over the last several days.

"Hate will not be tolerated in Cottage Grove. Period. The information contained in these flyers does not represent what we stand for as a police department or a community," Police Chief Pete Koerner said in a department Facebook post.

Cottage Grove Police are asking that members of the public who may have photos or videos of the suspects captured by home security systems to call the department at 651-439-9381.

A resident in St. Paul Park, which neighbors Cottage Grove, posted on Facebook that she also found white supremacist flyers in her driveway Saturday morning. The flyers advanced a version of the racist "Great Replacement" conspiracy theory and were distributed in plastic baggies that were weighed down with rice.

In the post, Cottage Grove PD said that while the information in the flyers was not illegal, the content was disturbing. A sergeant with the department told Fox 9 that they could pursue littering charges against the suspects and are investigating as a precautionary measure.

In May, an 18-year-old white supremacist who also supported the "Great Replacement" theory fatally shot 10 people at a supermarket in a predominately Black neighborhood in Buffalo, New York,

The flyer in St. Paul Park included a link to a Telegram page, where an anonymous user posted a video that seems to shows a man, whose face is blurred out, distributing copies of the same flyer by throwing them into driveways from a car window.  The video caption claims the group distributed 1,000 flyers in Minnesota in June.

The page and another associated with were filled with racist, antisemitic and xenophobic posts. They included links to media coverage of antisemitic flyers that were distributed near a Jewish school in St. Paul last week, raising the possibility that the two incidents are related.