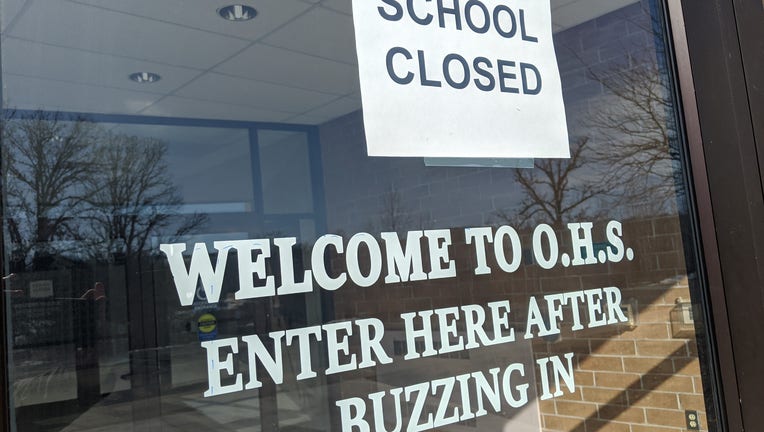 Osceola schools were closed Tuesday after a person with a confirmed case of the new coronavirus attended an event there over the weekend. (FOX 9)

OSCEOLA, Wis. (FOX 9) - Osceola Public Schools cancelled classes and all after-school activities Tuesday after the district learned a person with a confirmed case of the new coronavirus visited the high school for an event Saturday. The school will reopen Wednesday.

The person with the confirmed case of COVID-19 attended the Destination Imagination regional tournament at Osceola High School on Saturday as well as a practice event in the Prescott School District on Friday, according to officials from both school districts.

Osceola, Wisconsin schools closed as a precaution Tuesday due to coronavirus

The Osceola, Wisconsin high school closed as a precaution Tuesday due concerns over the coronavirus. It will reopen Wednesday.

Tuesday afternoon, Pierce County officials say the patient, a man, was not coughing when he attended the events. He was tested Sunday at a lab in Minnesota and then confirmed positive Monday. He is in isolation at his home where he will remain for two weeks.

His symptoms were described as mild, but he will have to test negative before he is released from quarantine.

Osceola Public Schools decided to close its schools on Tuesday because the areas where the person visited in the schools were large rooms that required time to disinfect.

The Prescott School District said the areas the person briefly visited on Friday were small rooms that were cleaned thoroughly overnight once the district learned of the confirmed case, so there was no reason to close the school.

Students from 13 different school districts attended the all-day tournament on Saturday. No other school districts have canceled school. There were reportedly a mix of people at the event including children and elderly people.

State and county health officials as well as the school districts say the students, parents and staff who participated in the event are considered to be low risk for contracting COVID-19 based on the symptoms the person with the virus exhibited while at the event. The person was reportedly not coughing at the event nor did they have any prolonged conversations with anyone but their own family.

"Anything they need they should do," said Jeremy Viebrock, who is a father of an Osceola student. "I don't see any problem. If they need a week, then they need a week. Better safe than having someone get really sick or die over it."

Still, one parent is skeptical that the school district's effort to clean up is enough.

"I think it's good they're cleaning it, but if they had school yesterday or Monday and someone was exposed, and now they go back Wednesday, is it really going to help anything?" asked Balsam Lake mother Brittany Maier.

The Wisconsin Department of Health Services recommends individuals with low-risk exposure to the coronavirus self-monitor for fever and other symptoms and self-isolate if symptoms appear.

Are you in an impacted district or have a student that attended Destination Imagination? Contact FOX 9 at fox9news@foxtv.com.

As of Tuesday afternoon, Minnesota has two confirmed cases of COVID-19 and Wisconsin has three.