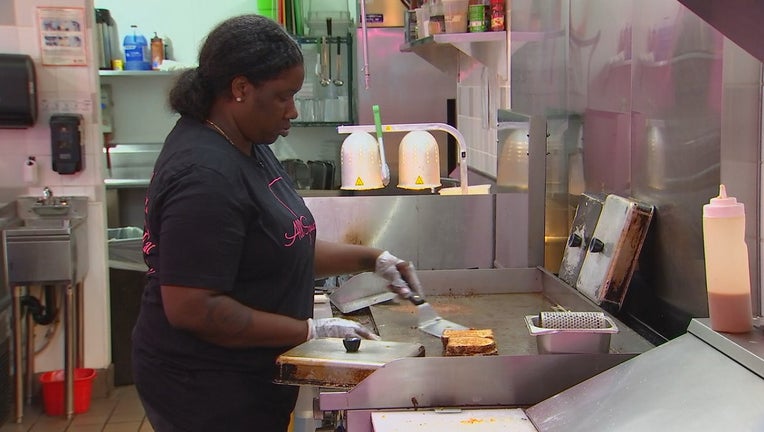 Onika Goodluck received an outpouring of support this week after she was the victim of a theft. (FOX 9)

MINNEAPOLIS (FOX 9) - Onika Goodluck, the manager at All Square grilled cheese restaurant in south Minneapolis, saw an outpouring of support this week after her side business took a hit.

"A little overwhelmed with everything that has happened in the last 24 hours," said Goodluck.

Onika Goodluck, the manager at All Square, a grilled cheese restaurant in south Minneapolis, saw an outpouring of support this week after her side business took a hit.

When Goodluck left work on Thursday, she realized someone had stolen her purse from her car. Not only was her driver's license and Social Security card inside, but so was a bank deposit bag containing all the money she had made at the Black Entrepreneur State Fair the day before from her Caribbean soul food catering business O's Kitchen.

"Just to know that all that hard work we put in for that last day just went away just like that was, wow," Goodluck added. "The only thing I had for it was, 'Wow this was really happening right now.'"

But Goodluck's colleagues at All Square, which invests in formerly incarcerated Minnesotans, started a crowdfunding campaign to recoup her stolen funds. Within just a few hours, it exceeded its $5,500 goal by more than a thousand dollars.

"The notion that she was devastated after putting that kind of investment into her business, that's the magic of crowdfunding," All Square CEO Emily Hunt Turner said. "We all put in a little and do so much for someone who is just an inspiration to this community."

Goodluck says any money raised over the goal will go towards a food truck or trailer to take her business to the next level. In the meantime, she is grateful for everyone who gave her a helping hand when she needed it the most.