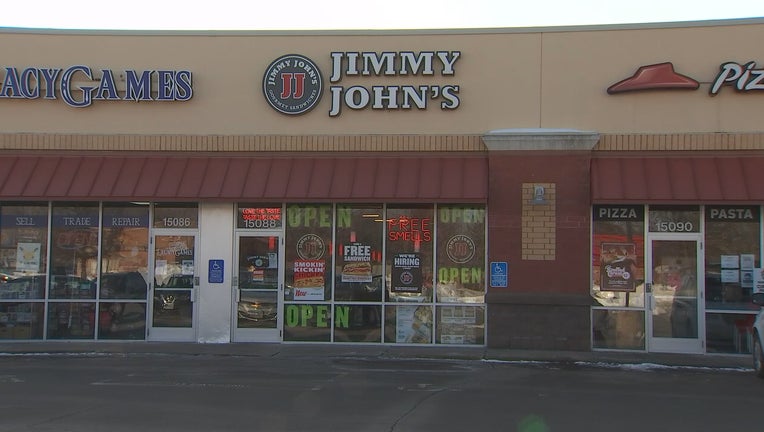 The co-owner of Alibi's in Lakeville has been cited following the confrontation in Rosemount on Saturday.

ROSEMOUNT, Minn. (FOX 9) - A fight over a facemask at a Jimmy John’s in Rosemount ended with multiple criminal charges.

A customer is now cited for misdemeanor assault and disorderly conduct for slapping a 19-year-old store manager. And it's far from the first time that man has made headlines in recent months.

A fight over a facemask at a Jimmy John’s in Rosemount ended with multiple criminal charges.

"You can’t go around behaving like this," said attorney Matt Little. "This is not adult behavior."

According to police, on the evening of January 30, a couple walked into the shop to order. Witnesses say the woman was the owner of Alibi Drinkery, Lisa Monet Zarza.

Monet Zarza and Alibi have been in the headlines recently for violating the governor’s restaurant pandemic shutdown order and opening to maskless crowds.

At Jimmy John’s, she reportedly had no mask. The manager said something, there was an argument, and her male companion allegedly used his open hand to slap the employee on the other side of the counter. Both then left the store.

"It’s just a mask," said Little. "So for anything to get close to this level of what happened, it’s absolutely absurd."

Rosemount police got involved as video of the encounter from Jimmy John’s store cameras spread across local social media groups.

Investigators identified the man as 39-year-old Ricardo "Ricco" Baldazo, who is listed on official Secretary of State records as Lisa Monet Zarza’s business partner at Lionheart, LLC, the owners of Alibi.

At the time of the sandwich shop encounter, Baldazo was out on bail on charges of attempted first-degree murder of a police officer in connection to a bizarre shooting episode last September in Burnsville.

Friday night, officials said he has been served with a copy of the citation for fifth-degree misdemeanor assault and disorderly conduct for his alleged slap inside Jimmy John’s.

The attorney for the employee posted a video to Facebook showing the moments leading up to the alleged slap.

Surveillance video shows moments before the alleged slap of an employee at the Rosemount Jimmy John's. Courtesy of Little Law of Lakeville, Minnesota.