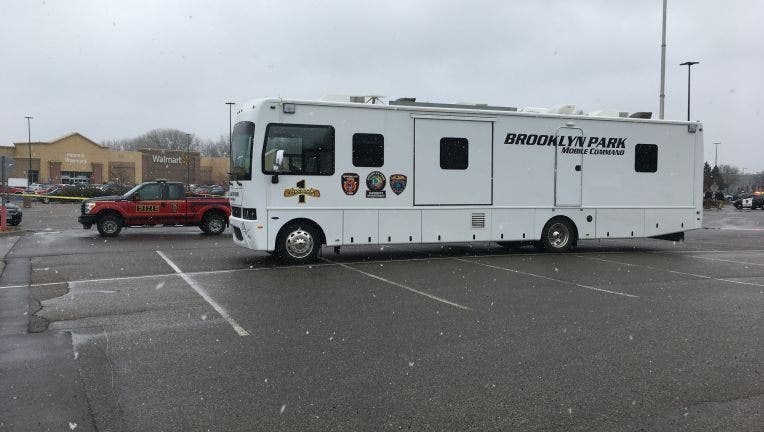 Officers investigate an officer-involved shooting in the parking lot of the Walmart in Brooklyn Park. (FOX 9)

BROOKLYN PARK, Minn. (FOX 9) - A 32-year-old Chaska, Minnesota man has been charged with three felonies after he allegedly shot at a Brooklyn Park police officer in the parking lot of the Walmart.

James Howard Klein is charged with two counts of first-degree assault of a peace officer and one count of possessing a firearm while having a previous conviction.

According to the criminal complaint, police officers responded to the Brooklyn Park Walmart Monday for a reported shoplifting. Police were told the man, identified as Klein, was buying a large amount of ammunition and was wearing a holster.

When Cudd encountered Klein in the parking lot, Cudd ordered him to stop and to take his hand out of his coat pocket. Klein, however, ignored multiple commands to stop and continued to walk away. Cudd then used a Taser to try to stop Klein. The Taser did not stop Klein, who ran off between two vehicles and fired a shot at Cudd.

Cudd and Lazenberry both fired shots in response to Klein. Lazenberry chased Klein and saw him point a handgun at a vehicle in the parking lot. When the vehicle drove away, Klein turned toward Lazenberry with the gun still drawn. Lazenberry fired again, hitting Klein, who then fell to the ground.

According to the complaint, Klein's handgun is visible in the body camera video. After searching Klein, officers found he was wearing a belt, which was holding numerous rounds of ammunition.

Klein is receiving treatment at North Memorial Hospital for gunshot wounds to the leg and hand. According to the BCA, he was not seriously injured.

According to the Brooklyn Park Police Department, two other suspects were taken into custody on the day of the incident. Officials estimated about 500 customers and employees were inside the Walmart during the shooting.

The Minnesota Bureau of Criminal Apprehension is investigating the incident.