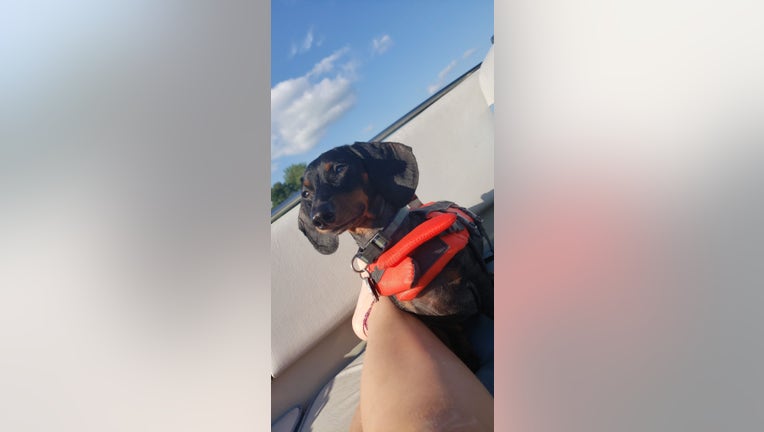 Buddy the Dog takes a boat ride during the summer in this photo provided by his family.

CENTERVILLE, Minn. (FOX 9) - A Centerville, Minnesota man is facing a charge for animal cruelty after police say he shot his neighbor's dog with a pellet gun, causing the dog's death.

The Centennial Lakes Police Department was called on December 4 after the dog's owner noticed her three-year-old dachshund named "Buddy" had been hurt.

According to the charges, the owner had brought the dog to its veterinarian thinking Buddy may have been hurt playing with other dogs. However, the vet found the dog had been shot with a pellet gun and had a projectile lodged in its brain. Buddy later died from his injuries.

Speaking with police, the owner said she found blood near a fence where Buddy was injured and she suspected her neighbor, Larry Hanson, was involved.

The owner said that, in the past, Hanson had yelled at her dogs for barking and, in one incident in August, chased after them with a broomstick.

The officer then spoke with Hanson, asking if he had shot the dogs and if he owned a pellet gun. Both times, officers say Hanson hesitated before saying "no."

That evening, officers returned and spoke with Hanson's wife. She told officers they, in fact, did have a pellet gun in the home and offered to show it to officers. But, when she tried to find it, police say she was unable to locate it.

Hanson's wife also admitted that Hanson did not like his neighbor's dogs and had threatened to shoot them with the pellet gun in the past. When asked if she thought Hanson had shot the dog, police say his wife said "yes."

The following day, officers questioned Hanson who they said admitted to shooting the dog with the pellet gun. In his statement, Hanson said he did not want to kill the dog, rather he only intended to "sting" it. According to the charges, he also admitted to previously hitting the dog with a broom handle, adding he did not like the dogs barking.

When asked where the pellet gun was at, Hanson told officers he had thrown it over a fence into another neighbor's yard. Police say they were able to retrieve the gun.

Following the shooting, the dog's family has set up a Justice for Buddy Facebook page, tracking the case.