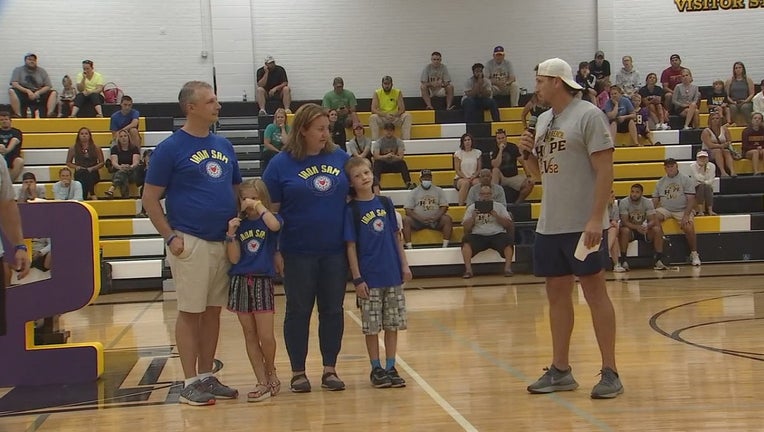 Chad Greenway hands a check to the family of Sam Schumann as he awaits a transplant. (FOX 9)

This year's theme was hope. When it was over, everyone moved into the high school gymnasium, where special game balls were given out to the young athletes for hustle and attitude. And then, a very special gift was given to a very special child: Sam Schumann, a 10-year-old boy with a congenital heart defect.

At birth, his parents knew he’d eventually need a transplant. That day has now come. The fifth-grader-to-be is hooked up to a backpack IV 24-7 as he waits his turn on the heart transplant list.

Greenway and his team on Friday provided some much-appreciated assistance for this family of Vikes fans, a $7,500 check.

"It could be tomorrow, it could be two years from now," said Sam's dad Mark Schumann. "We are just waiting for that call….hope that his heart can hold out and get that transplant in time."

For 14 years, Greenway and camp organizers have always preached that this is so much more than football, bigger than sport. The Schumanns are very grateful.

"The emotional part is what we’re going through with Sam, but also the support from the community," said mother Stacey Schumann. "His school, friends and family, and even people we don’t know. They send us cards of encouragement. It’s a great town to live in."

While Sam said he didn’t love the camp spotlight, he is looking forward to getting back to school in the fall. Stacey tells us it feels like they’ve got a whole team cheering them on.