At Hope Street, each guest will get individual guidance and support to search for more permanent housing and employment. With that targeted support, the typical guest is able to move out after 39 days.

MINNEAPOLIS (FOX 9) - Hundreds of homeless youth in the Twin Cities can now find shelter and support at a place called Hope Street.

"It was everything we were looking for," said Keith Kozerski.

As the chief program officer for Catholic Charities’ youth emergency shelter, Kozerski has been deeply involved in trying to find a new location after the decision to close down the youth shelter at the former St. Joseph’s Home.

The search led them to a three-story building at 42nd and Cheatham in the Hiawatha neighborhood of Minneapolis that was built as an assisted living center.  The operators decided to consolidate the residents at other facilities which created the opportunity for Catholic Charities to purchase the building for its Hope Street emergency youth shelter.

"This setting is going to allow us to have individual or semi-private rooms all with their own bathrooms for youth," said Kozerski.

The housing is a major upgrade from the St. Joseph’s campus that was more of a congregate group setting.  The new Hope Street allows more private space for its guests to call their own and focus on connecting them with social workers on getting more permanent housing. The goal is to have the facility feel more like a temporary apartment than a shelter.

"Every youth has their own bed, desk, dresser, and nightstand to kind of decorate how they want," explained Kozerski.

It’s called a youth shelter even though the guests are typically between the ages of 18 and 24.  The demographics of the guests reflect the persistent disparities in the Twin Cities. Nearly 80% are Black, Indigenous, or people of color, often referred to as BIPOC.  Across Minnesota, one in four of homeless youth in this age group identifies as LGBTQ. 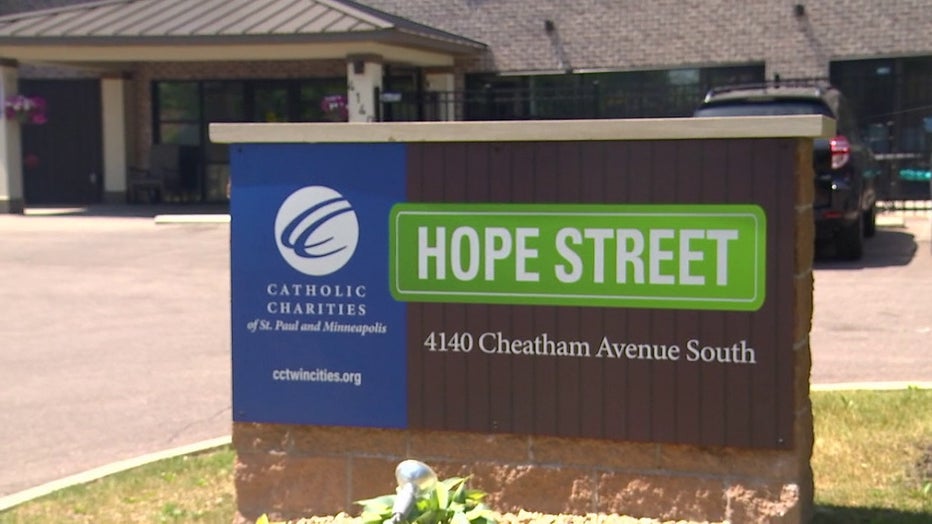 "It is unfortunate that a large number of the youth we see every year have aged out of the foster care system and not because anyone has intentionally neglected them," explained Kozerski.  "It’s just our systems aren’t set up for the long-term scope of a person’s life."

Kozerski and others say the unique background and needs of this homeless population is a mismatch with the services offered by more traditional shelters such as Harbor Lights in Minneapolis and Dorothy Day Place in St. Paul.

At Hope Street, each guest will get individual guidance and support to search for more permanent housing and employment. With that targeted support, the typical guest is able to move out after 39 days.  And Kozerski says nearly 90% of them are in the same housing arrangement after 6 months.

Hope Street can house up to 30 guests at a time in its new location.  But demand is overwhelming.  Last year Catholic Charities had to turn away a thousand youth who came to Hope Street seeking help.  Across the state, it’s estimated there are five thousand homeless youth.

Catholic Charities was able to acquire the new Hope Street facility with considerable support from both the City of Minneapolis and Hennepin County which each contributed $2.5 million.  A private donor contributed another $1 million.

"We welcome everyone who comes to our door and figure out how do we help them in a way that feels dignified to them," said Kozerski.  "And this facility really speaks and shouts, we are about dignity."