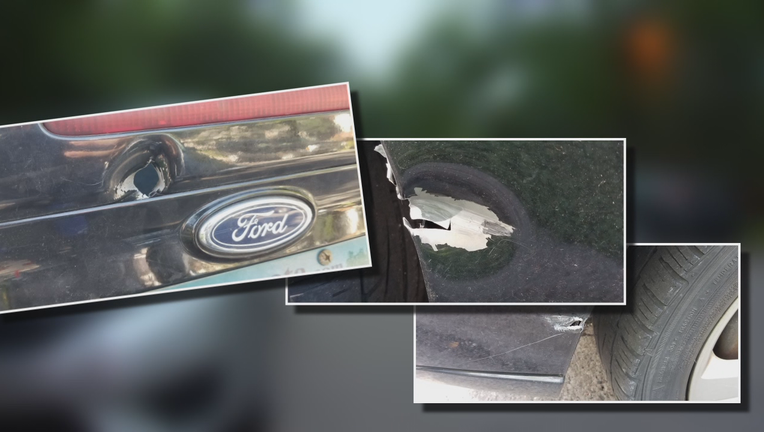 MINNEAPOLIS (FOX 9) - A typical morning drive to work turned terrifying for a south Minneapolis woman, who says her car was shot at multiple times near the Lakewood Cemetery.

It’s a route Ramicah Witz is very familiar with.

A typical, morning drive to work turned terrifying for a south Minneapolis woman, who says her car was shot at multiple times near the Lakewood Cemetery.

When she headed to work in the early morning hours on Wednesday, she encountered something on Kings Highway just past 38th Street W that wasn’t quite right.

“The barricade was from curb to curb, there was no going around it,” said Witz.

A median to her left meant Witz was essentially trapped and she was forced to backup her car several blocks. She eventually turned around and pulled over to 38th and Dupont.

“I thought I should call police and make sure someone else doesn’t have to go backwards down the road like that,” she said.

Police told FOX 9 a city sewer barricade is usually left along the side of Kings Highway, so that crews can move it out into the road when there is flooding. The road block, however, was not supposed to be out that morning. No one from the city put it out.

Witz was about to continue onto work when her morning took an even scarier turn.

“I realized something was either hitting my car or rattling it - loud sounds, I really thought it was fireworks, that there was some kind of prank happening. I wanted to believe that,” said Witz.

She called 911 again. Police met her a few blocks away, but it was dark and no one saw any damage to her car. She wouldn’t see what had happened until hours later when she was with her dad.

“He called my name and said, ‘Hey come look at this,’ and it was a big bullet hole in my trunk,” said Witz.

For a third time that day, Witz called police. They discovered her car had been hit by gunshots three times – and found a bullet in her trunk.

“You hear people say all the time, ‘You never think this will happen to you,’” said Witz. “Never think six blocks, seven blocks from your home, going to work and working a second job, innocently going to do what you normally do, could’ve been it.”

Witz says doesn’t want to see this happen to anyone else in her city.

“I think this was random, but I do think they were purposely shooting at my vehicle, considering how many times it was hit, where it was hit,” she said.

She says she feels everyone needs to be on alert.

“I would hate for this to become a norm in our city, that’s not the Minneapolis I know,” said Witz.

Minneapolis police say this is an active investigation. Police are looking into whether the road barricade, which stopped Witz, was put there on purpose by those responsible for the shooting.