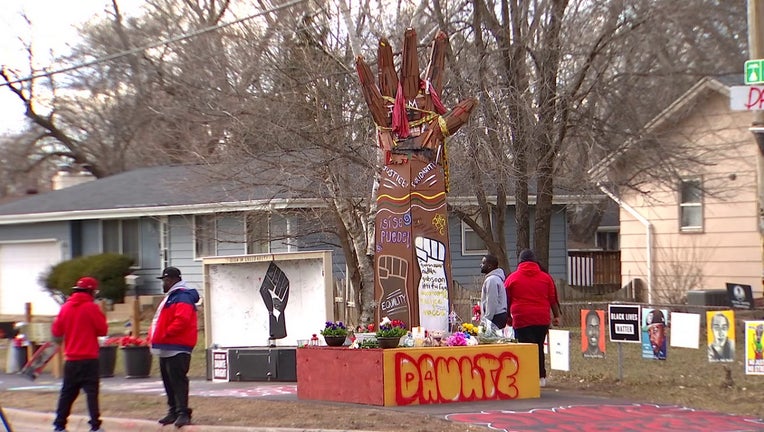 BROOKLYN CENTER, Minn. (FOX 9) - It's been a year since the shooting death of 20-year-old Daunte Wright in Brooklyn Center. On his "angelversary," the community gathered together to celebrate his life.

At sunset on Monday, friends, family, and community members held a candlelight vigil to remember Wright.

Monday marks one year since Daunte Wright was shot and killed by a Brooklyn Center police officer during a traffic stop, and community members are remembering his life tonight.

"It’s a heavy day for sure," said family friend Joylenna Garcia, who helped organize the anniversary event Monday. "Daunte is now looking over us instead of being with us in this life."

Garcia said the goal of Monday’s event was for Wright's family to feel close to him. Local activists say it's also a reminder that change is needed to make the community feel safe.

"It's about keeping the peace but still fighting the fight," said Rachel Nelson, president of Twin Cities Relief.

Wright was shot and killed by former Brooklyn Center police officer Kim Potter on April 11, 2021, after she mistook her gun for a Taser. Police had pulled over Wright for having expired tabs and hanging an air freshener on his rearview mirror.

"It's the one-year anniversary of Daunte Wright being taken from our community, and I wanted to be here with the community as they process that," said Rep. Ilhan Omar (D-MN). "Grief is a long process, so I know that they're still grieving. I want them to know that their member of Congress is working really hard to make sure that what happened to Daunte doesn't happen again."

The non-profit Twin Cities Relief provided a barbecue at the event.

"A big plate of food changes from the police shooting rubber bullets at us to having a conversation with us, and I think it's important for us to make sure that Daunte Wright's family knows that we're here to support them," Nelson said.

It was an understandably tough day for Wright's family Monday, and they asked for privacy as they remember him.