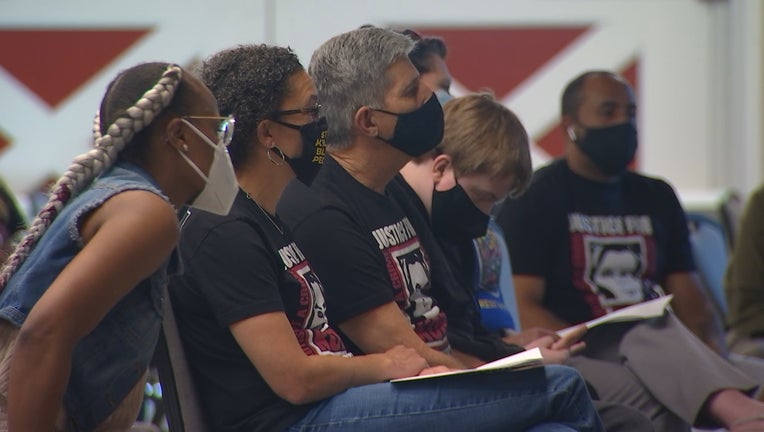 Saturday's meeting was packed with residents and activists pushing for the bill's approval. (FOX 9)

BROOKLYN CENTER, Minn. (FOX 9) - After the deadly shooting of Daunte Wright last month in Brooklyn Center, the city council has approved a number of policing changes as part of a resolution proposed last week by the mayor.

After the deadly shooting of Daunte Wright last month in Brooklyn Center, the city council has approved a number of policing changes as part of a resolution proposed last week by the mayor.

The act follows the deadly shooting of Wright by a Brooklyn Center police officer just over a month ago. During the stop, officers attempted to arrest Wright on a warrant but a struggle ensued. As Wright tried to drive away in his vehicle, former officer Kim Potter apparently attempted to use her Taser gun but instead grabbed her service weapon, shooting Wright once.

Wright drove away but crashed shortly after. He was pronounced dead at the scene.

Activists cheered Brooklyn Center's newly approved approach to policing, saying that it could be used as a template for other cities across the country.

Last weekend, Mayor Michael Elliott introduced the resolution for the public safety division. The council then discussed changes during the week ahead of Saturday's vote.

Saturday's meeting became an emotional and sometimes tense affair as speakers from Daunte Wright's family along with the family of another man killed in a police shooting, Kobe Dimock-Heisler, addressed the council.

Tensions were high throughout the meeting, particularly as a member of the public took to the podium to oppose the bill.

"Your son was killed, not because of a traffic stop in my mind, but because he had warrants," the speaker told the Wright family. The man's remarks drew yells from the crowd. Members of the crowd approached the man, who insisted he wasn't being disrespectful, before the mayor moved in to separate the people. The city also muted the podium microphone for those watching over Zoom.

After the man was moved from the podium, another speaker responded to the comments, saying: "We understand to some of you white privilege folks that you have not lived through what we've lived through. But it doesn't take away from our experience. We are living through it and our loved ones are being shot in traffic stops not because of warrants but because we have a brown skin color."

The bill was eventually approved on a 4-1 vote, to an eruption of support from the crowd.

"Brooklyn Center did not look to be in the national spotlight on these issues, but here we are," said Mayor Elliott in a statement. "And given the tragic incidents that occurred here, including those taking the lives of Daunte Wright and Kobe Dimock-Heisler, we must respond with a commitment to do better, and today’s vote is part of that response.

"Brooklyn Center’s response to the rise in civic activity since the death of Daunte Wright has included efforts to involve de-escalation expertise, enhance communication to City residents about listening sessions and services available to meet the needs of residents impacted by demonstrations and disruptions in City operations."