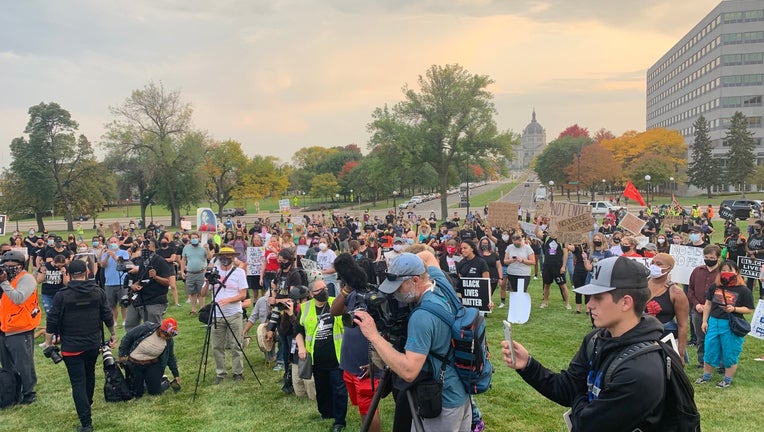 Activists rally at the Minnesota State Capitol in solidarity with protesters in Louisville after the Breonna Taylor decision.

The Minnesota protest started at the State Capitol around 6 p.m. and moved west on University Avenue Wednesday night. Metro Transit said the demonstration caused delays. The crowd later marched onto I-94 near Marion Street. Authorities blocked off traffic in the area. The protesters stayed on the highway for about 30 minutes before getting off and moving onto the nearby streets.

Protesters walk down I-94 during emergency Breonna Taylor protest

Minnesotans protesting the charging decision in the Breonna Taylor case walked down I-94 as part of an emergency rally Wednesday night.

The group returned to the Capitol and largely filtered out. Around 10 p.m., a small group of a few dozen, however, moved to the Ramsey County Jail and gathered outside a chain link fence.

According to Minnesota State Patrol, two arrests were made on I-94 during the protest. There were also two crashes on I-94, both without injuries. The cause of the crashes remains under investigation.

Protesters gather outside of the Ramsey County Jail

Following the charging decision in the Breonna Taylor case, protesters gathered outside the jail and police headquarters in St. Paul Wednesday night.

A Kentucky grand jury on Wednesday indicted a single former police officer for shooting into neighboring apartments but did not move forward with charges against any officers for their role in Breonna Taylor’s death.

A grand jury announced that former Officer Brett Hankison was charged with three counts of wanton endangerment in connection to the police raid on the night of March 13. His bond was set at $15,000.

Kentucky Attorney General Daniel Cameron said Hankison and the two other officers who entered Taylor’s apartment announced themselves before entering the apartment and did not use a no-knock warrant.

Protesters march in St. Paul on I-94 following charging decision in Taylor case

Protesters in St. Paul gathered at the Capitol and marched in the streets following the charging decision in the Breonna Taylor case.

“According to Kentucky law, the use of force by (Officers Jonathan Mattingly and (Myles) Cosgrove was justified to protect themselves," Cameron said at a news conference Wednesday. "This justification bars us from pursuing criminal charges in Miss Breonna Taylor’s death.”

Wanton endangerment: What do charges against officer in Breonna Taylor case mean?

JaNaé Bates of the interfaith group ISAIAH Minnesota said hearing that the shooting death of Breonna Taylor has now brought only charges of wanton endangerment against one former officer feels like, once again, more of the same.

“It’s upsetting. And it’s mostly upsetting because it’s expected,” Bates said. “I’ve been in this work for years now and I’ve seen way too many families who have been hurting about this. Too many people’s names have been hashtags and so little has been done.”

Bates said with the death of Breonna Taylor, and then the death of George Floyd two months later in Minneapolis, 2020 became the boiling point for years of frustrations. This charging decision only adds more.

Community members are reacting to the charging decision in the Breonna Taylor case. Activists in Minnesota are planning a rally at the state Capitol Wednesday night.

Across the country, preparations have been made for those frustrations to boil over again, knowing that this decision to not charge for Breonna Taylor’s death -- only for a shot fired into a neighboring apartment -- could bring unrest again.

Minnesota. Gov. Tim Walz said he will always allow space for peaceful protests, but never again what Minneapolis and St. Paul saw in May.

“We will see here in Minnesota and it’s worth thinking toward pre-trial motions and eventually a trial in George Floyd’s death, to be prepared, to allow people the space to grieve, to express their first amendment rights but not to allow destruction of property or endangerment of people,” Walz said.