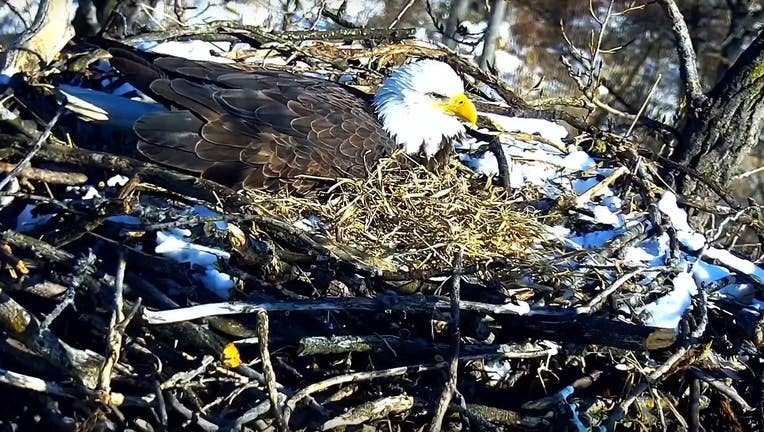 A bald eagle incubates the eggs in the EagleCam nest. (Minnesota DNR/EagleCam)

(FOX 9) - A record number of people are reportedly watching a pair of bald eagles on the Minnesota Department of Natural Resource's popular EagleCam as they care for their eggs this winter.

The EagleCam streams live video from a bald eagle nest in the Twin Cities.

The DNR says this pair of bald eagles is new to the nest and also likely new to parenting. They are currently caring for three eggs—the first of which was laid last Thursday.

Incubation lasts about 35 days, meaning viewers could see an eaglet hatch in mid-March. If that happens, it would be the first time since 2017 that an eaglet has hatched in the EagleCam nest.

The DNR said the pair took over the terrority from the EagleCam nest's longtime female resident and her mate last year, but they did not produce any eggs. In 2018, the female eagle laid three eggs, but none proved viable. Three eaglets, however, hatched in 2017.