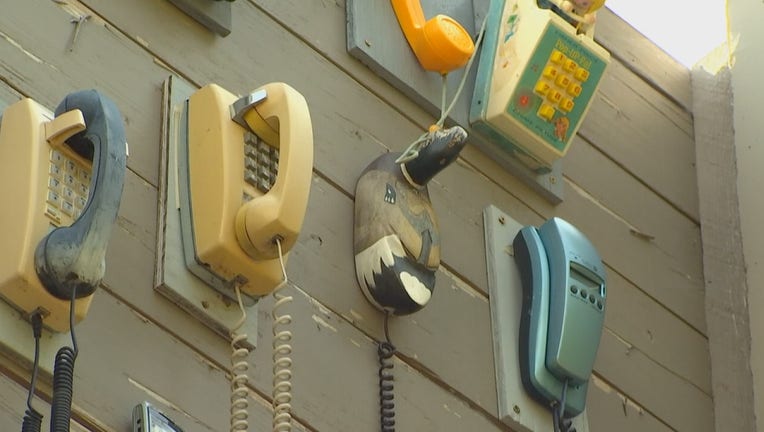 An art display of phones along Highway 100 in St. Louis Park has been approved.

It’s the work of a local artist, and for years the man behind it all remained anonymous - but now he’s finally come forward.

"I started with just a couple of them, and then I just put up more and more and more," artist Dave Gatzmer said. "Each one has a story to it, [but] I was just putting them up as kind of a goof. People come by, take pictures, go along their way… some people blast by they don’t even notice it and they’re thrilled when they do notice it. When I get about five or six of them, I climb up there."

The phones are clearly out of service, but it’s safe to say they still send a message through their variety of shapes, colors and sizes.

"It’s just turned into a monster that I have no control over," Gatzmer said.

However, Gatzmer’s canvas is owned by MnDOT, and he didn’t call them to get permission before getting started.

"At first it was illegal," Gatzmer said.

He started out hanging the phones in the middle of the night, trying to keep his identity a secret, until neighbors caught him in the act.

Eventually St. Louis Park Mayor Jake Spano got on the phone with MnDOT and sent a survey to the neighborhood to see if the phones were welcome to stay.

"They were all unanimous in their support for us to keep it," Mayor Spano said.

"All of us think it’s so great," Osterberg said.

"I kind of want to keep doing it until it maybe gets out of hand and somebody says that’s enough," Gatzmer said.

His only rule with the display is that he does not pay for the phones. Almost all of them have been donated by people in the community, and he’s placed a box at the base of the wall where anyone can leave a phone they’d like him to hang up.