For the first time in six special sessions, GOP lawmakers did not attempt to end Governor Tim Walz's emergency powers.

More than 60 percent of senators decided to vote from home Thursday. Republican Sen. Dave Senjem told FOX 9 he tested positive over the weekend after developing a slight cough, and was isolating at home in Rochester but feeling better.

Senjem said he attended Senate Republicans' leadership election last Thursday before feeling symptoms. He said he likely got the virus before that, while campaigning in his district last week. 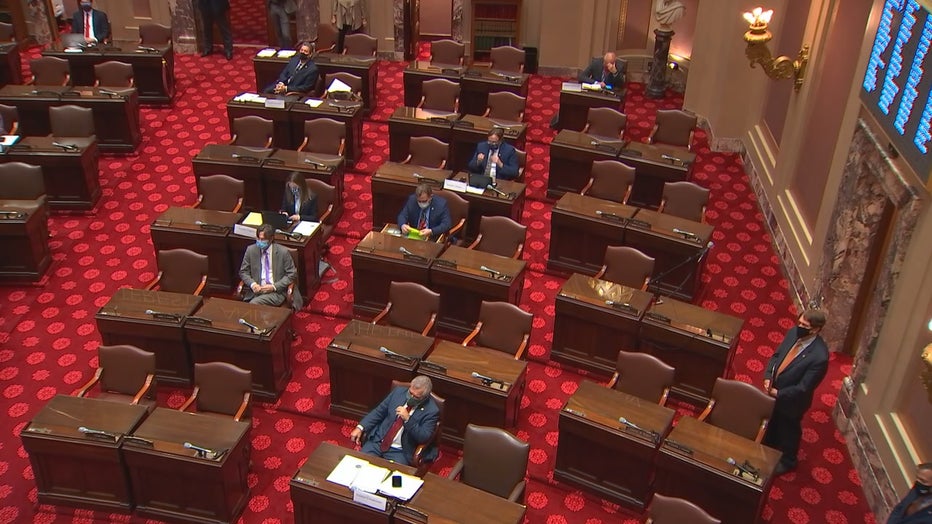 There were plenty of empty seats in the Senate on Thursday.

Senate Majority Leader Paul Gazelka did not say if Senjem's positive test was a reason why the Senate GOP did not vote on emergency powers Thursday. Instead, Gazelka said Republicans had made their position on Walz's powers clear and did not need to take another vote.

"We’re really just trying to get in and out of this special session," Gazelka, R-East Gull Lake, said during an interview on Minnesota Public Radio. "I think we’ve made it pretty clear you don’t need emergency powers to deal with the virus. We’ve always said the virus was serious."

At least 22 of the 35 Republican members did not attend Thursday's special session in person. A spokeswoman for the Senate GOP would not say how many were quarantining or if anyone else had tested positive.

"I can’t comment on any medical diagnosis as a matter of personal privacy," said Rachel Aplikowski, the GOP spokeswoman.

At least 19 Democrats did not attend the special session in person. John Pollard, chief of staff for Senate Democratic Leader Susan Kent, said no DFL senators have tested positive since Sen. Dan Sparks of Austin two weeks ago.

Minnesota has recorded 36,989 new cases and 238 deaths over the past seven days. That number of deaths is more than what Minnesota reported for the entire month in either July, August, or September. Hospital executives have said their facilities are running short on staffing, with hundreds of workers off the job after exposure within the community.

The Senate has voted in each of the previous five months to end Walz's powers. But stripping Walz of his emergency powers requires votes in both the House and Senate, and the Democratic-controlled House has never gone along.

In the House on Thursday, retiring Democratic Rep. Alice Mann, a hospital physician, pleaded with colleagues to take the virus seriously.

On a 73-60 procedural vote, the House blocked a bill that would've required up-or-down votes on each of Walz's executive orders after 30 days passed since the governor issued them. The bill required a supermajority to even come up for consideration Thursday.

House Republican Leader Kurt Daudt said Democrats were trying to "snuff out" collaboration with the GOP, though he said the virus "is serious" and encouraged members to wear masks on the House floor, which some Republicans have not.