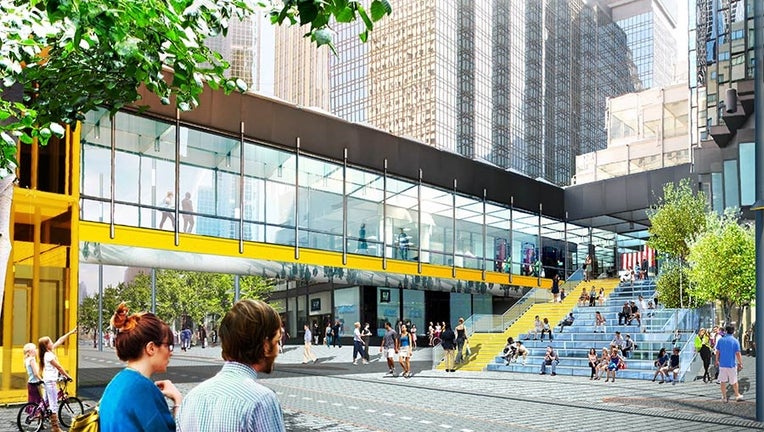 Renderings show what the plans for Minneapolis' Nicollet Mall looked like.

MINNEAPOLIS (FOX 9) - When developers and city leaders are selling the public on any project, big or small, a concept rendering is almost always provided.

Take the plan unveiled a few weeks ago for the Wishbone, a promenade wrapped around the lock and dam in Minneapolis jutting out into the Mississippi.

Art of the Deal: Renderings of proposed projects draw expectations

Minnesotans have seen a lot of the drawings lately, such as the proposed Upper Harbor Terminal project in North Minneapolis, St. Paul's proposed mixed-use development on the former Ford Plant property or the new riverfront project in St. Paul which would include a waterfall.

Nick Halter of the Minneapolis-St. Paul Business Journal, began scoring projects with how true they were to initial concept renderings, with the hashtag #renderingvsreality.

He gave U.S. Bank Stadium a good score and said the design lived up to expectations.

But the so-called People’s Park in front of the stadium didn’t live up to the hype or the sketches.

“When the city owns land and they sell it to a developer, they have to wow them a little bit,” Halter told Fox 9.

Nicollet Mall, before and after

The Nicollet Mall redesign had that ‘wow’ factor in its sketches.

Rick Nelson, the longtime food critic for the Star Tribune, has a broader palette that includes urban design and a love for the Nicollet Mall he grew up with.

The $50 million dollar facelift, left him and many others, underwhelmed.

The sketches before the work began had images of people gathered around a fire pit and a glass staircase cascading from the IDS skyway to street level.

"If you look at the renderings, there should be a fire pit over there.  Really a fire pit?  There won’t be any legal problems with that,” Nelson commented.

The fire pit didn't make it into the redesign, along with other things seen in the drawings: the glass staircase, skating rink, botchy ball, and pavers.

“It doesn’t look like this in real life and of course, what you really notice are the pavers that don’t exist,” Nelson said.

"Like many of our large-scale public projects, the project faced complex challenges including infrastructural upgrades and a competitive construction climate, while needing to be delivered to the public on time and on budget,” read a statement from James Corner Field Operations.

The mall did get chairs, more trees, a mirrored sculpture, bus shelter, sculptures, and light orbs. The project was over budget by half, so the dreams in some of the concept renderings were cut. Most of the money went underground, to infrastructure.

Nelson believes the Nicollet Mall is a cautionary tale when looking at architectural renderings.

"Of course, they were trying to sell their firm, this is what we’re going to do and it’s going to be so amazing. And then what we got at the end obviously, wasn’t that,” he said.

One hundred years ago, the Twin Cities were going through a similar phase of dreaming big. The 1920s saw a massive growth in population and housing, a look that defined urban life in Minneapolis for decades.

Among the plans on the table, an ambitious proposal to turn the city into a kind of Paris along the Mississippi. In detailed, yet fantastical renderings, Minneapolis got an unrealistic European make-over.

The plan called for a grand avenue of the arts, ending at the Minneapolis Institute of Art.

"This perspective system is quite common with architectural renderings, this one point perspective which is a renaissance perspective,” Noon said.

Renaissance painters mastered what’s known as linear perspective, which creates an illusion of three-dimensional space, in other words: the buildings get smaller creating the perception of distance. Receding lines lure the eye to a vanishing point on the horizon, giving the scene depth.

And he took his share of artistic liberties, adding a bridge here, taking a building out there, the atmosphere before accuracy.

“The architects are all facing the same issue and how do you actually create an image going back into space, without making the whole thing frontal on the surface. You have to create the illusion of space. He does it by atmospheric perspective," Noon said.

Tim Dufault is CEO of the Cuningham Group and admits, like the Renaissance painters, renderings shoot for the atmosphere.

The Cuningham Group now offers clients a virtual reality tour of their projects and since all the design work is computerized, it takes only a few hours to develop a 3D rendering.