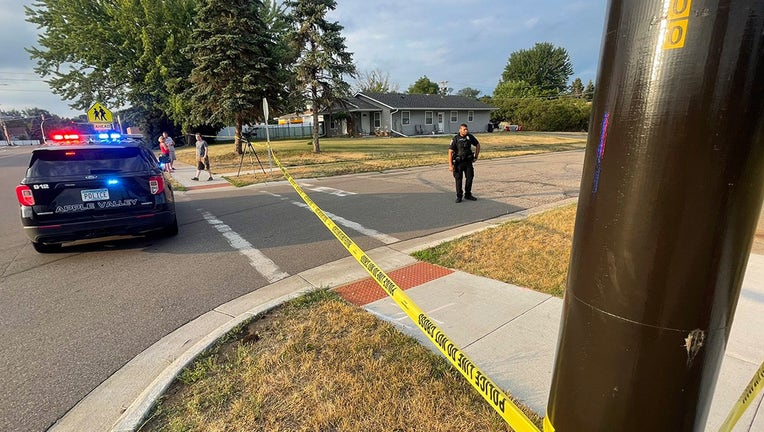 Police have confirmed that one person is dead and two were injured after a shooting near Garden View Dr. and Oriole Dr. in Apple Valley. (FOX 9)

APPLE VALLEY, Minn. (FOX 9) - Prosecutors have now filed assault charges against two men involved in a shootout at an Apple Valley home that left a mother dead and her ex-boyfriend hurt.

Billy Joe Pryor Jr. was charged with second-degree assault with a dangerous weapon and possession of a pistol without a permit on Tuesday for the shooting that happened Sunday evening.

According to the charges, police responded around 6:30 p.m. Sunday to reports of the shooting at the home on the 900 block of Oriole Drive. When they arrived, police found two people shot: Pryor and his mother.

Pryor was treated and released from the hospital. His mother, however, 49-year-old Michelle McGill, was lying in the driveway and had been shot multiple times in the lower abdomen with a shot to her chest. She was pronounced dead at the scene.

As they investigated, police learned a tan SUV had left the scene and arrived at the hospital with a third victim, Willie John Selmon. Selmon, McGill's ex-boyfriend, had been shot in the head and was listed in serious condition. However, police say he was later able to give a statement to officers.

Selmon told police he had been in a long-term relationship with McGill but they had recently separated.

On the day of the shooting, Selmon said he had returned to get some of his belongings from the home. When he arrived at the home, he says McGill and Pryor were sitting in their respective vehicles in the driveway. He parked behind McGill's vehicle and went inside the home.

Selmon says, after gathering his belongings, Pryor had backed his vehicle up so it was next to Selmon's SUV.

According to the charges, there was an exchange of words between the two men, during which Selmon says Pryor warned him he had a gun. Selmon told officers that Pryor fired the first shots, striking him in the face. The charges state Selmon told police he got out of his SUV and ran toward McGill — hoping that Pryor might stop shooting if Pryor's mother was between them.

But, the charges state, Pryor got out of his vehicle and both men exchanged shots while McGill was seated in her vehicle in the crossfire.

McGill was shot 10 times as a result. However, it's unclear who shot McGill at this point or which gun delivered the fatal blows. So far, no one has yet been charged with murder but the county attorney says the investigation is continuing — and murder charges will be filed in McGill's death.

In a statement, the Dakota County attorney placed blame on both men for McGill's killing.

"This inexplicable violent behavior of Pryor and Selmon caused the death of Ms. McGill," said Dakota County Attorney Kathy Keena. "This is an ongoing case and additional charges will be filed related to the murder of Ms. McGill once the investigation is completed. My deepest sympathy is extended to the family and friends of Ms. McGill for their great loss."

Pryor was ordered to be held in Dakota County Jail on $500,000 bail. He is scheduled to appear in court at the end of the month.