Another Way: Desperation led farmer back to nature

He stopped tilling the soil, which stopped erosion and kept in moisture. In addition, he stopped planting genetically modified crops, cutting his cost for seed and fertilizer.

(FOX 9) - On the Minnesota prairie near the South Dakota border, you will find Ben Dwire and his family moving their grass-fed beef cattle from one field to another.

“This is nature’s original template. What we’re doing is nothing brand new. This is the same system the buffalo used when they built the prairies," Dwire said.

It’s a philosophy known as regenerative agriculture, a way of doing things that enhance the ecosystem and replenish the soil.

For Dwire, a fifth generation farmer, desperation and drought was the catalyst for change.

“Probably the biggest thing was economics...Wanted to look for a different way of doing things, and also, just environmental impacts," he told Fox 9.

The drought of 2012 was a turning point for the family. Dwire got half the corn he was expecting and ran out of grass to feed his cattle by August. He thought he might have been looking at his last harvest.

“Little bit of a wake-up call, if you will. We felt very vulnerable. We felt out of control," he commented.

He stopped tilling the soil, which stopped erosion and kept in moisture. In addition, he stopped planting genetically modified crops, cutting his cost for seed and fertilizer.

“You feel like you’re on a treadmill constantly chasing a carrot. You get a new chemical, but eventually weeds become resistant too.  It’s constantly looking for the next thing. If you have diversity you can naturally break up that cycle,” he said.

The 38-year-old started birthing calves in the spring, rather than the fall, when there is plenty of nutritious grass. His cows are not kept in confinement pens, they are left to roam the prairie, and he keeps them moving from field to field to avoid overgrazing.

He said his veterinarian bills have almost disappeared. 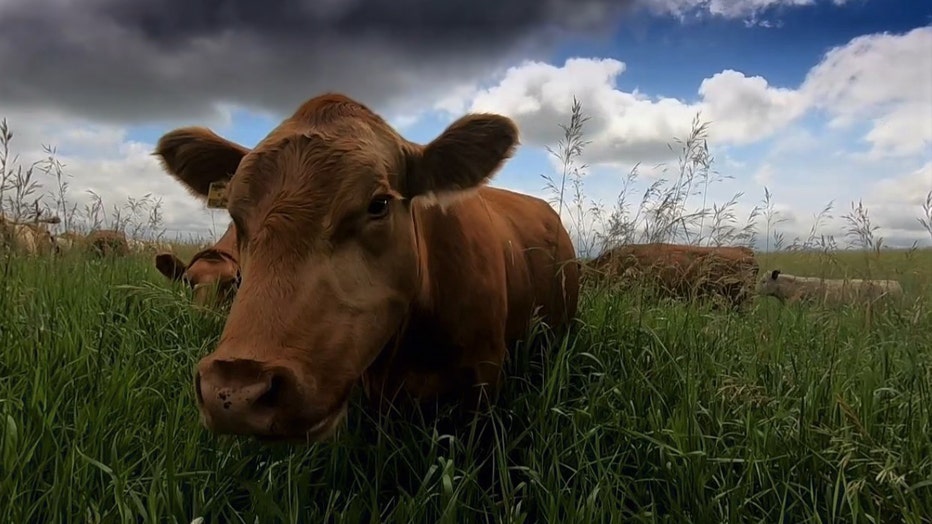 "They are just moving around out there. The pathogens aren’t out there. They’re moving on to fresh clean soil all the time.  The open air, fresh air, and space just limited those diseases."

He plants a variety of grasses, believing diversity is key.

“Nature likes to be surprised. She’s been around a long time, she could teach us a lesson or two. We don’t get one over on her. You have to keep her on her toes," he said.

Along with his wife Kristi, who works as a pharmacist, they have carved out a life for themselves and their two daughters. At a time when farmers feel they have to go big to survive, Dwire has found you can still be small, if you keep things very simple.