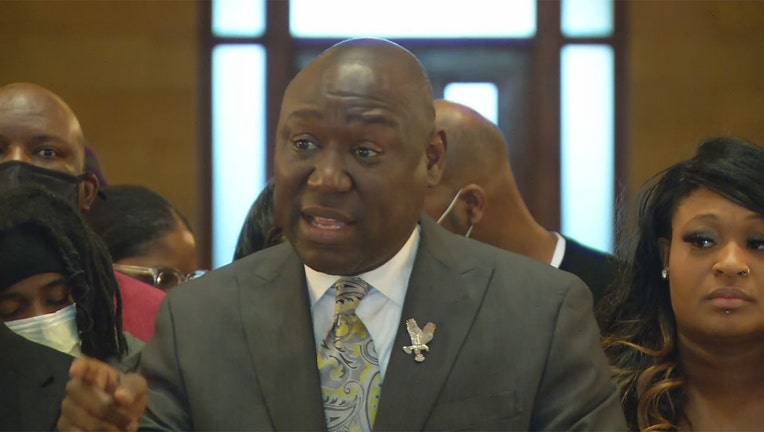 Attorney Ben Crump, who will represent the family of Amir Locke, held a news conference at the Minnesota State Capitol to demand an end to no-knock search warrants.

ST. PAUL, Minn. (FOX 9) - A week after the fatal shooting of Amir Locke by Minneapolis police, a press conference was held at the Minnesota Capitol Thursday to demand permanent policy change.

The families of Amir Locke, as well as, Breonna Taylor were joined by attorneys Ben Crump, Jeff Storms and more to collectively call for the "abolishment of no-knock warrants and justice for their loved ones."

"What is so heartbreaking, and why we're here at the great Capitol of the state of Minnesota, is because when we were making proclamations over in Minneapolis, even though we thought we were being heard obviously our proclamations were ringing hollow when we called for better police and more restraint," Crump said at the event. "We thought you could take the word of City of Minneapolis officials when they said there was a ban on no-knock warrants… George Floyd was supposed to be the turning point."

In addition to a ban on the warrants in Minnesota, according to Crump, a federal decree should be placed by President Joe Biden to execute the ban nationally as well, "as a result of the blood of both Breonna Taylor and Amir Locke."

"President Biden, start at the top and the states will follow," Crump said. "The list goes on and on… How many more are needed before we change these racist policies?"

The families and Crump were also joined by Toshira Garraway, the founder of Families Supporting Families Against Police Violence.

"These families are out here hurting, and Amir would be alive today – had the officials in this building held officers accountable before Amir," Garraway said.