LOS ANGELES - A group called Amazon Employees for Climate Justice (AECJ) is calling for a “virtual walk out” in response to the firings and conditions within Amazon workplaces.

The group said in a post on Medium that it is asking fellow Amazon employees to “call in sick” on Friday, April 24, “to show that you want Amazon to go in a different direction.”

The virtual strike comes in response to the Seattle-based e-commerce company firing two employees who were reportedly outspoken critics of the company’s policies and workplace conditions during the COVID-19 pandemic.

According to the Washington Post, which is owned by Amazon chief executive Jeff Bezos, Emily Cunningham, a user experience designer and AECJ member, was fired after a tweet she made on Monday, March 27.

In the tweet, Cunningham promised to match donations up to $500 in support of Amazon warehouse workers who were critical of the company’s workplace conditions amid the pandemic.

Cunningham told the news organization she was fired on April 10 and that Maren Costa, a principal user experience designer and fellow AECJ member, was also fired for retweeting Cunningham’s message.

Following the firings, the AECJ says it sent out a meeting invitation to Amazon workers on April 10 to talk about working conditions in warehouses during the COVID-19 pandemic.

AECJ claims in their Medium post that Amazon deleted the meeting invitation from calendars after 1,500 Amazon workers accepted the invitation, but that hundreds of employees attended the meeting anyways.

“Amazon must not be allowed to censor internal conversations between employees,” the group said. “We are outraged that Amazon deleted a meeting invitation to prevent us from talking with our own coworkers about their working conditions.”

“Amazon must not be allowed to censor internal conversations between employees,” the group said. “We are outraged that Amazon deleted a meeting invitation to prevent us from talking with our own coworkers about their working conditions.”

The group says it is planning to host a live stream on April 24, where “Maren & Emily will answer more questions about what's happened and their thoughts on the situation,” according to the organization's post on Medium.

“Amazon’s retaliation against Maren & Emily and its censorship is a gross misuse of power. We demand that Amazon make it right,” the group said.

Amazon did not immediately reply when prompted for comment.

In March, some Amazon and Instacart workers walked off their jobs, demanding increased protection and pay amid the COVID-19 pandemic. 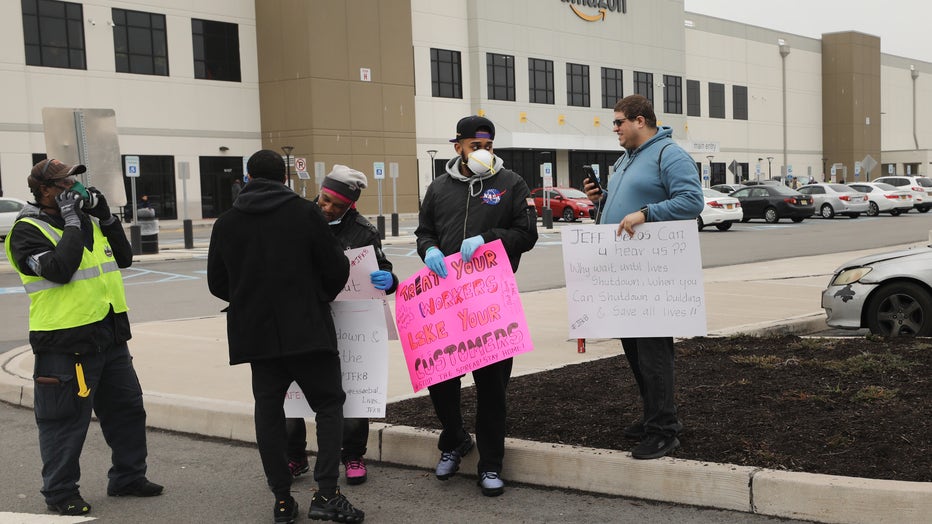 NEW YORK, NEW YORK - MARCH 30: Amazon employees hold a protest and walkout over conditions at the company's Staten Island distribution facility on March 30, 2020 in New York City. Workers at the facility, which has had numerous employees test positiv

Christian Smalls, the worker who staged that Amazon walkout, was subsequently fired from the company.

According to the Associated Press, New York City Mayor Bill de Blasio ordered the city's Commission of Human Right to investigate whether the dismissal was retaliatory. New York Attorney General Letitia James called on the National Labor Relations Board to investigate and said her office is also considering legal options.

“It is disgraceful that Amazon would terminate an employee who bravely stood up to protect himself and his colleagues," James said in a statement.