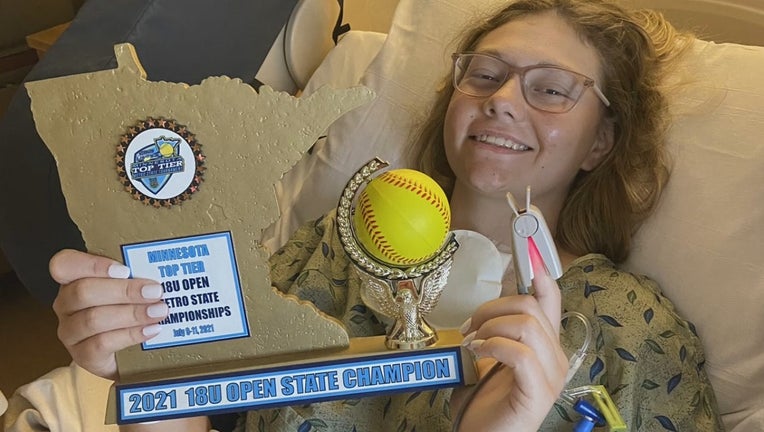 (FOX 9) - A Minnesota traveling softball team is practicing some outstanding sportsmanship both on and off the field. After winning a state title, they gave a heartwarming show of support to one of their teammates fighting cancer.

For the last couple of years, Norah Schmitz has been a member of the Minnesota Bombers traveling softball team. Lately, she says this group of young women has felt more like a family.

A Minnesota traveling softball team is practicing some outstanding sportsmanship both on and off the field. After winning a state title, they gave a heartwarming show of support to one of their teammates fighting cancer.

"All the support from my team and the Bombers club overall is so overwhelming and I've never felt anything like it before," she said. "It’s just such a loving feeling to have."

A week ago, Schmitz played centerfield in seven games over two days in her last tournament of club ball in Forest Lake. But when the team won the state championship in their division, her teammates gave her the trophy to help her get through some tough times.

"For them to show her that type of empathy that type of love, it’s been overwhelming," said Norah’s mother Theresa Schmitz. "Just to know that they all had her back that she wasn't fighting alone."

"I think that's just the epitome of our team," added Bombers head coach Leah Fletcher. "I think it’s just representative of how they are there for each other when they know someone needs it. I think that just spells it out."
Schmitz was diagnosed with thyroid cancer last month and had surgery on Wednesday to remove a golf ball-sized tumor from her neck. But she says having the trophy lifted her spirits after the operation and for what will be a difficult recovery.

"It gave me something to look forward to," she explained. "Getting out of the surgery and seeing it and remembering the feeling of winning the whole thing and being the champion is just so much more of a better feeling than sitting in the hospital in pain."

Schmitz wasn't able to travel to Kansas with the Bombers for another tournament this week. But she hopes to see them in person for their last tournament the last week in July because they were there for her. She wants to be there for them.

"I've always been a team player," she explained. "I don't care if I play or not. I do whatever is best for the team."