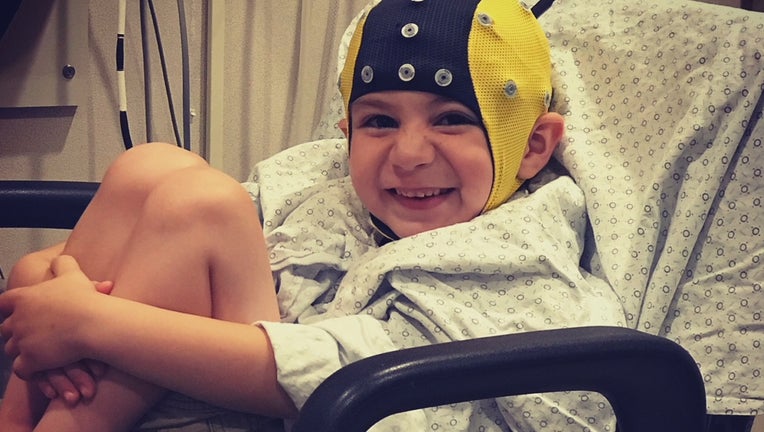 Vinny Skaro is using his wish to help others. (Supplied)

WACONIA, Minn. (FOX 9) - A Waconia boy is following in the footsteps of another child from his city, and using his Make-a-Wish opportunity to help fix up a playground for kids with disabilities.

"I like swinging on the swings," explained Vinny Skaro. "Racing my brother sometimes here down the slide."

After the COVID-19 pandemic postponed his trip Disney World, 8-year-old Vinny Skaro decided to donate his check from Make-A-Wish to the City of Waconia, Minnesota to help build an inclusive playground at Waterford Park instead.

When it's warm out, Vinny Skaro visits the playground at the park near his house every other day. But he knows it's not easy for all kids with special needs like him to play on the equipment.

"I just want to help other kids have a fun place to play with wheelchairs," he says.

Vinny has a rare genetic disorder that causes nightly seizures. He uses a wheelchair when he gets tired and his condition can be terminal in some cases.

Make-a-Wish offered to send Vinny and his family to Disney World last year, but the trip was postponed until next year because of COVID-19. So instead, Vinny decided to donate the money to the City of Waconia to help build an inclusive playground at Waterford Park.

"He said that's what I'm doing, I'm donating to the wheelchair park," said mother Nicole Skaro. "He got off my bed and walked away and I was like ok. I guess that's what we are doing."

On Monday night, Vinny spoke to the Waconia City Council and presented a check for $5,000 to the mayor.

"I said I want to help the inclusive park because I feel like it's the right thing to do," said Vinny. "I was thinking in my head, 'This is weird but I love it'."

And he's not stopping there. Vinny is also hosting a hot chocolate stand at the park on Saturday afternoon to help raise another $22,000 to buy a merry-go-round that's wheelchair accessible for the playground. Because for him, having a big heart and helping others is child's play.

"Because I like to help lots of people," said Vinny. "I just don't want to help myself all the time."