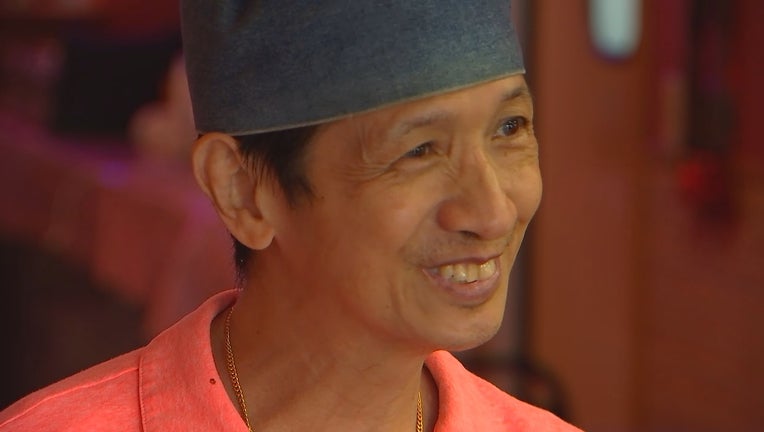 Kevan Tran smiles on his first day back to work after the shooting over the summer. (FOX 9)

BLOOMINGTON, Minn. (FOX 9) - After he was hurt in a shooting over the summer, the owner of a Bloomington restaurant was back to work on Thursday.

The scars show just how close Kevan Tran came to death. In June, he was the victim of an attempted robbery at his popular roast beef shop in Bloomington.

After owner hurt in shooting, Bloomington roast beef shop sells out during reopening

After he was hurt in a shooting over the summer, the owner of a Bloomington restaurant was back to work on Thursday.

A brazen crime that left him in the hospital for a month and forced him to close his store as the bills piled up.

"They’re like wait, Kevan? Our Kevan? The one who owns the little roast beef shop?" said nephew John Quach. "And everyone’s like 'what can we do to help?'"

A well-known Bloomington staple, Tran’s friendly demeanor prompted this community to step up big. A GoFundMe raised more than $60,000.

"I mean it's Kevan," said customer Julie Johnson. "It's just his spirit and who he is and who he’s always been. And immediately when this happened, everyone was on Facebook and they were rallying for him and doing everything they can to support him."

So, it was no surprise when he re-opened Thursday that there was a line out the door all day long.

"I told my husband we were on the way," said Johnson. "I’m like, I’m sure they’re out of food but I at least want to say hi.”

As Johnson predicted, a hello was all Tran had to offer after four to five hours of being back open. The restaurant first sold out of roast beef then everything else on the menu. Because after feeding the community for 30 years, they came Thursday to show their support.

"He just works so hard," added Quatch. "So to see him come back from that is pretty inspiring."