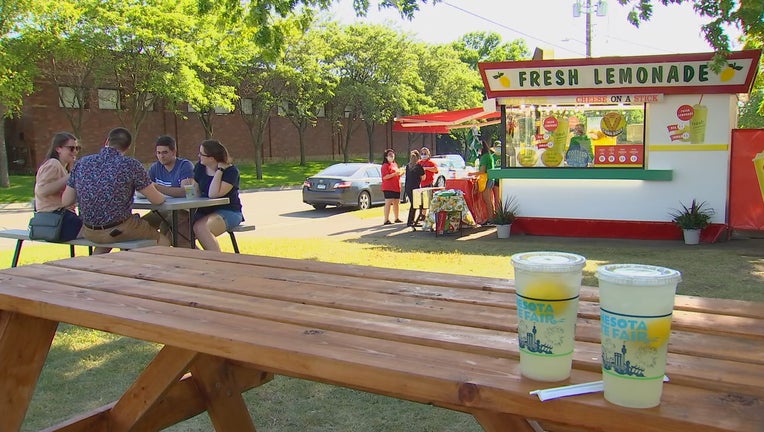 Fair vendors pop up around the Twin Cities metro.

(FOX 9) - When summer comes to a close in late August, it just won't be the same not stepping into the Minnesota State Fairgrounds. But, state fair vendors have found a way to make sure their customers can still get a taste of the beloved event.

Familiar tastes have been popping up around town over the past few weeks, including a food booth that has been at the state fair for 40 years.

With the 2020 State Fair cancelled, State Fair vendors are still giving the people what they want in some unconventional locations.

Damar Jackson thought he'd have to go without his favorite fair food this year, but instead he is chowing down on the cheesy creation in front of the VFW in Roseville.

“Every year at the state fair, I get the cheese on a stick. It’s the first and third and fifth stop. When I found out they were having them this year, I had to come - far and wide."

Stacey Petroff-Barona set up her family's food booth here a couple of weeks ago after the fair was cancelled due to COVID-19 concerns.

Now, she's selling cheese on a stick, lemonade and corn dogs so fans of the fair can still get a taste of the Great Minnesota Get-Together.

“Minnesota is, like, the ultimate fair state and people love the fair. I think if I am able to give a little fair to people, it’s a win for both of us," she said.

She's not the only state fair vendor helping satisfy Minnesotans’ cravings for food.

Lori Lexvold started a Facebook group called Fair Food Finder where vendors can post their locations and hours and members can post pictures of their finds. Her son even made a map with more 30 concessionaires in brewery and store parking lots across Minnesota.

"For many of them, this is their livelihood. I thought, ‘what can I do to help them?’ I thought I can start a Facebook group page. As we find them, we can post them on the page and people can find them and give them some business," she said.

“It’s helping us out a great deal to know there are people coming out trying to support us through these tough times," said Richie O'Neil with Richie's Cheese Curd Tacos.

And when it comes to fair food, Jackson says Minnesotans always have an appetite for more.

“Hopefully, they can make some money, but as long as they are here, I'll be here at least once or twice a week."