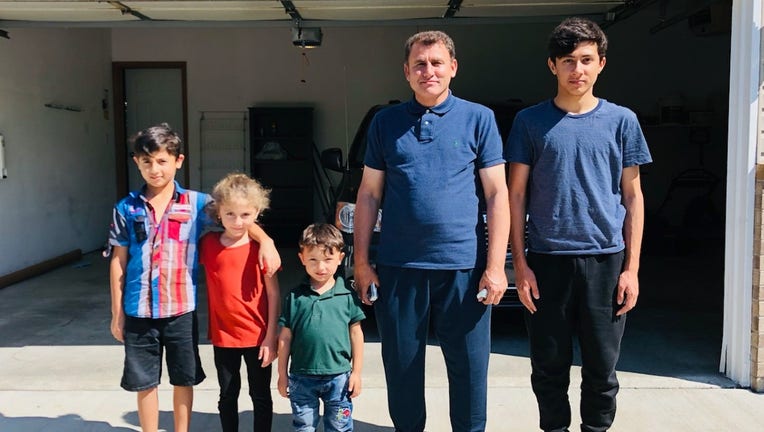 An Afghan family resettled in Minnesota just before the country fell to the Taliban.

SAVAGE, Minn. (FOX 9) - The first wave of Afghan families have begun arriving in Minnesota following the U.S. military withdrawal, and state officials report hundreds of evacuees and refugees from the war-torn country may soon follow.

FOX 9 followed one family’s dramatic journey as they escaped Kabul just a day before Afghanistan fell to the Taliban.

The first wave of Afghan families have begun arriving in Minnesota following the U.S. military withdrawal, and state officials report hundreds of evacuees and refugees from the war-torn country may soon follow.

Khan Marufkhail and his wife and seven children scrambled to the airport in Kabul on Aug. 13 as the government was on the brink of collapse. The Marufkhails just missed the desperate scenes as their last-minute evacuation flight took off.

"There was no time to bring something with us. We just came with one shirt, and one clothes, and one pair of shoes. Nothing," Khan said. "At that time, we just thought about how can we be safe? To be in somewhere, to be safe. So, my feeling was not good, but now I feel happy."

Khan said the family is happy to be in Savage, Minnesota, where his daughter Aqsa is already practicing the alphabet in school.

Her English teacher recalled watching the U.S. military withdrawal and the fall of Afghanistan only weeks ago.

"I think for all us, we saw it and saw that it was really tragic, but it’s also really easy to sort of make it feel like another far away thing that doesn’t impact us. So, I am really excited that I have the opportunity to welcome and love this family while they are here," said Mary Hoffman, Aqsa’s teacher at Glendale Elementary School.

Beyond his family’s safety and security, Khan said his kids’ schooling and their futures is what matters most.

Khan was a physician in his native country, and his work in public health management where he supported U.S. efforts to improve Afghan healthcare and nutrition made him eligible for special visa status to come to the states. Six years after first applying, Khan’s paperwork finally came through at the eleventh hour.

Meanwhile, Khan said he fears for his other family members who are still there.

"My three brothers and three sisters and their children, they’re still there, and they are at risk," he said.

Despite the challenges ahead, Khan has a positive outlook and is appreciative for the opportunities he and his family have been given. The resettlement agency he is working with, the International Institute of Minnesota, found the family a home in Savage and is covering the first six months of rent to give his family some time to acclimate, and for him to find work.

"I think people underestimate just how difficult it is to give up everything that you have ever known and that you’ve left a lot of family behind and you left your career behind. It’s just a very big adjustment and it takes time," said Jane Graupman with the International Institute of Minnesota.

Khan is hoping to help the tens of thousands of Afghan refugees coming to the U.S. right behind him. Many of the refugees are currently housed at military bases, including Fort McCoy in Wisconsin where they are being processed and vaccinated before being moved to communities all across the country.

Officials at the Department of Human Services report that just 35 Afghans with this special immigrant visa status have arrived to Minnesota since May.

The state is also expecting up to 300 or so additional Afghan evacuees and refugees in the coming weeks, and these resettlement agencies are looking for help, specifically with housing and clothing needs with winter on the horizon.