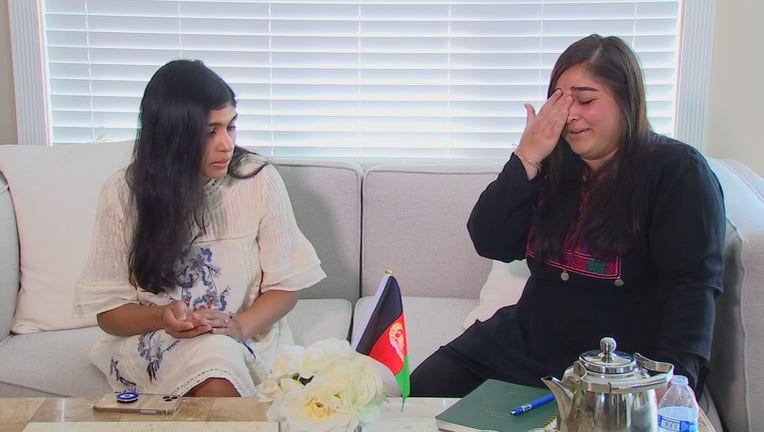 Samira Melapyar (left) and Tabasum Sadozai(right), who are both Afghan American and live in Minnesota, react to the Taliban's takeover of Afghanistan following the withdrawal of U.S. troops. (FOX 9)

ST. LOUIS PARK, Minn. (FOX 9) - Watching this situation unfold in Afghanistan from thousands of miles away, some Afghan Americans in Minnesota are dealing with survivor’s guilt, and they are upset because they feel Afghans are being blamed for this situation.

"It’s just so heartbreaking," Tabasum Sadozai said. "I will not accept that flag. This is our flag, and this is the flag my future kids are going to be waving."

Afghan Americans in Minnesota 'shattered' over Taliban takeover in Afghanistan

Afghan Americans in Minnesota say they are shattered over the Taliban takeover in Afghanistan.

Minnesotans Tabasum Sadozai and Samira Melatyar have never been to their motherland Afghanistan and after this week, they may never be able to.

"It just shakes me," Sadozai told FOX 9. "I’m shaking because girls are going to get raped."

Sadozai’s parents fled the country on foot in 1979 and now 40 years later, the family sees the cycle of violence and destruction in their homeland starting all over again.

"There isn’t going to be a normal society there anymore; anything that was built over the last 20 years is gone," Melatyar said. "From our family members who are still there, they’ve said that the stonings and hangings have already been scheduled."

All day on Monday the cousins closely followed the latest events, watching as a democracy built over decades crumbled after one week.

"It’s just so depressing," Sadozai said. "They replaced it with the Taliban flag and that shattered my heart."

In the afternoon they listened as President Joe Biden addressed the nation, but his words fell short.

They also watched a video of Afghans clinging to American planes in a last ditch effort by some to escape the country.

"I wanted to throw up watching that video," Sadozai said. "Watching how desperate people are to get out that they were willing to try to hang onto a plane as it’s taking off and lose their lives plummeting to the ground."

"I mean clearly people are rejecting them if they’re willing to fall off of a plane to get away from these people," Melatyar said.

The two see the War on Terror as lost, a victory for the Taliban, with countless lives claimed for nothing.

"All the hopes and dreams for these young girls [are] gone, it was all for nothing," Sadozai said.

The developments are especially tough for them to stomach, as they comes just days before Afghan Independence Day on Thursday, August 19.

"All we can say is please raise awareness of the situation," Sadozai said. "Please donate, please, please donate."