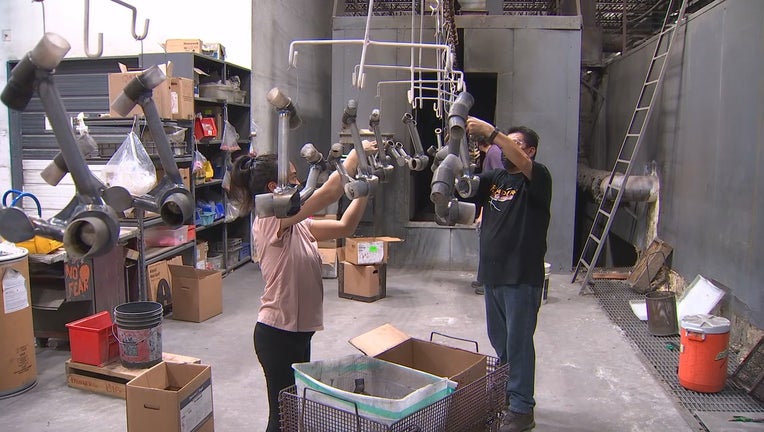 Employees work at JIT Powder Coating in Farmington, Minnesota. The owner is dealing with an unforeseen issue with his PPP loan.

Milner, who owns JIT Powder Coating in Farmington, got a $500,000 forgivable loan through the federal Paycheck Protection Program last spring as his sales plummeted during the pandemic-fueled recession.

Small business who received PPP loans to survive the COVID-19 pandemic are now getting surprised as they learn they will face state taxes on the money.

Milner used it to keep all 65 of his workers on the payroll and wasn't required to repay the money under the terms of the program. Yet he and other Minnesota business owners are now getting hit with surprise tax bills, because the state taxes forgivable loans.

"When I sat with my accountants in mid-December, and they told me that the $500,000 was going to be taxed at 9.8 percent, I was stunned. Absolutely stunned," Milner said in an interview at his shop.

Business owners didn't need to pay the money back if they primarily used it to pay their workers. The program was promoted as tax-free federally.

But Minnesota tax law is not set up to automatically conform to federal law, as about 20 states do. Instead, lawmakers would have to make the change.

That's why Milner's forgivable loan is subject to the state's corporate income tax, leaving him with a $50,000 payment due next month.

"We spent every last dollar for that purpose (employee payroll)," Milner said in an interview. "So the money's gone. So now, you have to come up with $50,000 out of nowhere."

Minnesota is the last state in the region that is taxing the PPP loans as income. Wisconsin changed its law this week, providing a tax break to tens of thousands of businesses. Iowa and North Dakota conform with the federal law, while South Dakota doesn't tax income.

The chairpersons of the House and Senate tax committees said in interviews that they support changes, though bills remain awaiting votes in their committees.

Making the PPP loans tax-free will cost $438 million over the next two years, analysts at the state Revenue Department estimated this week.

"I think everyone's kind of realizing the $438 million is going to be very tough to do, so it's going to have to be targeted," said House Taxes Chairman Paul Marquart, DFL-Dilworth. "I think we have to find a way to target those that have been hit the hardest."

State Sen. Carla Nelson, the Senate Taxes chairwoman, said her goal was to get a tax conformity bill to a Senate vote soon.

"The federal government will not tax forgiven PPP loans as income and neither should the state of Minnesota," said Nelson, R-Rochester.

In Minnesota, corporations are taxed at a flat 9.8 percent rate. Most businesses are taxed under individual income tax rates, which range from 5.35 percent to 9.85 percent.

The tax conformity issue is a top priority for business groups, including the Minnesota Chamber of Commerce.

"That definitely is the obstacle at the Legislature, the ($438 million) revenue cost," said Beth Kadoun, the Chamber's vice president for tax policy. "But we don't believe the state should be benefiting on the backs of small businesses that took this loan."

Late last year, Congress approved a second round of PPP loans, under which 45,443 Minnesota businesses have been approved for an additional $2.9 billion. This time, businesses had to meet a lost income threshold to qualify.

Milner, who received a second round of PPP funding, said he plans to use part of the new loan to pay the Minnesota taxes he owes from the first round.