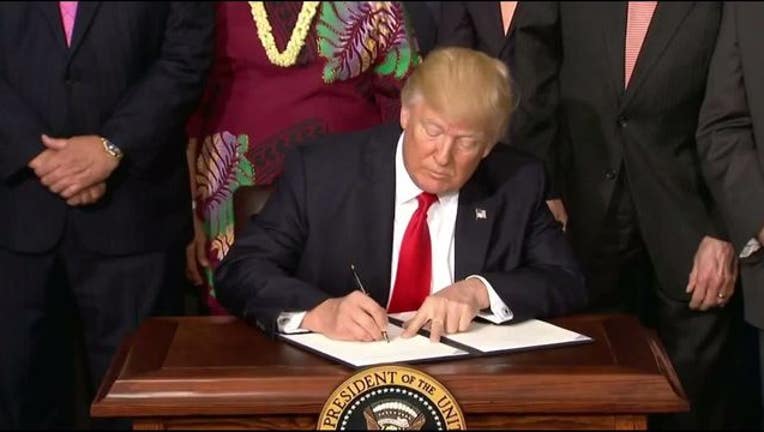 WASHINGTON (AP) -- Sure enough, the big trans-Pacific trade deal is toast, climate change action is on the ropes and various regulations from the Obama era have been scrapped. It's also a safe bet President Donald Trump hasn't raced a bicycle since Jan. 20, keeping his vow never to ride one in office.

Add a Supreme Court justice -- no small feat -- and call these promises kept.

But where's that wall? Or the promised trade punishment against China? Will the Chinese get off scot-free from "the greatest theft in the history of the world"? What about that "easy" replacement for President Barack Obama's health law? How about the trillion-dollar public works plan and huge tax cut that were supposed to be at the finish line by now?

Trump's road to the White House, paved in big, sometimes impossible pledges, has detoured onto a byway of promises deferred or left behind, an Associated Press analysis has found.

Of 38 specific promises Trump made in his 100-day "contract" with voters -- "This is my pledge to you" -- he's accomplished 10, mostly through executive orders that don't require legislation, such as withdrawing the United States from the Trans-Pacific Partnership trade deal.

He's abandoned several and failed to deliver quickly on others, stymied at times by a divided Republican Party and resistant federal judges. Of 10 legislative promises that require Congress to act, none has been achieved and most have not been introduced.

"I've done more than any other president in the first 100 days," the president asserted in a recent AP interview, even as he criticized the marker as an "artificial barrier."

In truth, his 100-day plan remains mostly a to-do list, spilling over well beyond his 100th day Saturday.

Some Trump promises were obviously hyperbole to begin with.

Don't hold your breath waiting for alleged Army deserter Bowe Bergdahl to be dropped out of an airplane without a parachute, as Trump said he'd do at many of his campaign rallies.

China's leader got a fancy dinner, complete with "beautiful" chocolate cake at Trump's Florida resort in April, not the promised "McDonald's hamburger" and humble pie.

But many promises were meant to be taken seriously.

Trump clearly owes his supporters a Mexico border wall, even if it doesn't end up being a foot taller than the Great Wall of China.

One page of his 100-day manifesto is devoted to legislation he would fight to pass in 100 days. None of it has been achieved.

The other page lists 18 executive actions and intentions he promised to pursue -- many on Day One. He has followed through on fewer than a dozen, largely through the use of executive orders.

Efforts to provide paid maternity leave, to make college more affordable and to invest in urban areas have been all but forgotten. That's despite the advantage of a Republican-controlled Congress, which the White House failed to pull together behind Trump's first attempt to repeal and replace Obama's Affordable Care Act.

An AP reporter who followed Trump throughout the presidential campaign collected scores of promises he made along the way, from the consequential to the fanciful.

A look at some of them, and his progress so far:

ENERGY and the ENVIRONMENT:

Done. Keystone XL is revived and construction of the Dakota Access is completed.

--Lift restrictions on mining coal and drilling for oil and natural gas.

Done. Trump has unraveled a number of Obama-era restrictions and initiated a review of the Clean Power Plan, which aimed to restrict greenhouse gas emissions at coal-fired power plants.

--Cancel payments to U.N. climate change programs and pull out of the Paris climate accord

Nope. Trump has yet to make a decision on Paris. His aides are torn.

--Pass a tax overhaul. "Just think about what can be accomplished in the first 100 days of a Trump administration," he told his supporters again and again in the final weeks of the campaign. "We are going to have the biggest tax cut since Ronald Reagan."

Congress was not given tax legislation to consider during his 100 days. Trump released the barest outlines of an ambitious plan this past week.

--Designate China a currency manipulator, setting the stage for possible trade penalties because "we're like the piggy bank that's being robbed. We can't continue to allow China to rape our country, and that's what they're doing."

Abandoned. Trump says he doesn't want to punish China when it is cooperating in a response to North Korean provocations. He also says China has stopped manipulating its currency for unfair trade advantage. But China was moving away from that behavior well before he took office. Also set aside: repeated promises to impose high tariffs on Chinese imports.

--Announce his intention to renegotiate or withdraw from the North American Free Trade Agreement.

Back and forth on that. A draft of his administration's plan for NAFTA proposed only a mild rewrite. But in his AP interview, his rhetoric toughened and he threatened anew to terminate the deal if his goals are not met in a renegotiation. Then, just hours after the White House said he was considering an executive order initiating a NAFTA withdrawal, he told Canadian and Mexican leaders he would not terminate the deal after all, but join them in renegotiating it to the benefit of all three countries.

Done. Trump has initiated plenty of studies over the past 100 days.

--Levy a 35 percent tariff on goods from companies that ship production abroad. Force companies like Apple and Nabisco to make their products in the U.S.

--Embark on a massive $1 trillion effort to rebuild the country's infrastructure, including airports, roads and bridges.

Trump tried, but the first version of his travel ban was blocked by the courts. A revised version dropped references to Syrian refugees entirely. That was blocked, too. He has yet to mention another campaign pledge: to deport Syrian refugees already settled in the United States.

--Inform his generals they have 30 days to submit a new plan for defeating the Islamic State group.

Trump did indeed order up a plan. It's unclear what it is since it has yet to be made public.

--Suspend immigration from "terror-prone regions" where he says screening is too difficult.

Trump's effort to bar immigration temporarily from some Muslim-majority countries has been stymied by courts.

In progress. The Homeland Security Department is considering a number of measures, such as asking for visitors' phone contacts and social media passwords.

--Build an "impenetrable physical wall" along the length of the U.S-Mexico border, and make Mexico pay for it.

The government has been soliciting bids and test sections could be built as soon as this summer. But Mexico is not paying for this work.

--End federal funding to "sanctuary cities" -- places where local officials are considered by Washington to be insufficiently cooperative in arresting or detaining people who are in the U.S. illegally.

The Justice Department has threatened to do so, but there are legal limits and a federal judge in California blocked the effort this past week.

Deportations have not increased.  Arrests of people in the U.S. illegally are up and illegal border crossings are significantly down.

--Cancel visas for foreign countries that won't take back criminals deported by the U.S.

There's been no discussion of this yet.

--"Immediately terminate President Obama's two illegal executive amnesties," one of which allows young people brought into the country as children to stay and work.

Trump has made no effort to end the program, even though it would take a single phone call. In fact, he told AP these young people can "rest easy" and not fear deportation.

GOVERNMENT and the SWAMP:

--Propose a constitutional amendment to impose term limits on all members of Congress.

On his pledge to curb the power of special interests, Trump has so far used an executive order to prohibit political appointees from lobbying the government for five years after serving in his administration and to ban outgoing officials from representing foreign governments. But he's discontinuing the Obama-era practice of releasing White House visitor logs, restoring a shroud over what special interests are getting in his gates. He's also issued at least one waiver to his lobbying ban, allowing a White House budget adviser to go advocate for a business trade group

This was one of Trump's first actions. But the freeze has since been lifted.

--Require that two regulations be eliminated for each new one imposed.

Trump signed an order requiring agencies to identify two existing regulations for every new one imposed -- though there is nothing in the order that requires the two to be eliminated.

--End the strategy of nation-building and working to replace autocratic leaders.

Trump's foreign policy posture is still in its early stages, though he has already intervened in Syria and has escalated rhetoric against North Korea.

--Move the U.S. Embassy in Israel to Jerusalem.

The administration says it is studying the issue.

--Negotiate the release of all U.S. prisoners held in Iran, even before taking office. Renegotiate or leave the Iran nuclear deal.

No prisoners have been released. The administration is studying the nuclear deal and Trump told AP "it's possible" the U.S. will withdraw.

--Create a safe zone in Syria for refugees, paid for by the Persian Gulf states.

--"My first day in office, I'm going to ask Congress to put a bill on my desk getting rid of this disastrous law and replacing it with reforms that expand choice, freedom, affordability. You're going to have such great health care at a tiny fraction of the cost. It's going to be so easy."

The bill to replace Obama's health law was pulled from Congress because it lacked enough support. He will try again with a revised plan.

--Eliminate gun-free zones in schools and on military bases.

--"I promise I will never be in a bicycle race."

So far, so good. Trump's vow came after John Kerry, then secretary of state, broke his femur in May 2015 while riding a bicycle. He was not in a bicycle race.

--Bar his generals from being interviewed on television.

Most weekends as president, Trump has broken his pledge to avoid the golf course, after years of criticizing his predecessor for playing the game. "Because I'm going to be working for you, I'm not going to have time to go play golf," he told a Virginia rally in August. "Believe me."

"If I become president, we're gonna be saying Merry Christmas at every store. ... You can leave `happy holidays' at the corner."

As president-elect over the holidays, he sent a "Merry Christmas" tweet. So did Obama. And both sent Happy Hanukkah wishes