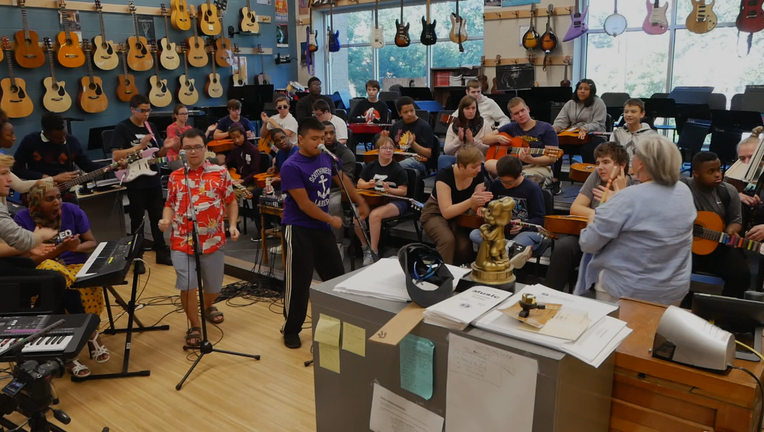 A teacher at Southwest High School formed 3 Strings Band to give students with special needs an opportunity express themselves through music. (FOX 9)

MINNEAPOLIS (FOX 9) - Inside a classroom at Southwest High School in Minneapolis, the walls are lined with guitars, but this is no ordinary school of rock.

"I do singing, drumming and that's all there is to it," said Michael McCormick, a student in 3 Strings Band.

Inside a classroom at Southwest High School in Minneapolis, the walls are lined with guitars, but this is no ordinary school of rock.

"Playing music makes your body really feel good,” said Shakri Ahmend, another band member. “And being a singer has been amazing for a few years."

Ruth LeMay, the director of guitar education at Southwest High, began orchestrating the group four years ago after she sat behind a group of special needs students during a performance of a military band.

"Students were vocalizing in tune and clapping and moving their body to the beat and it just prompted the question for me of where is the music for them?” said LeMay. “Where is the music education for them like it is for their mainstream peers and I was heartbroken to learn they don't have it."

The music teacher came up with her own color-coded system with cue cards to help high schoolers with cognitive and physical disabilities play pop songs with only three strings on their guitars, which is how the band got its name.

"I've always wanted to be a music teacher who made the classroom inviting, so we just looked around the room, ‘What's interesting for you to learn?’” she said. “Some kids wanted the microphone, some people wanted the drum set. Some kids wanted the bass. It just ended up being a rock band."

Michael McCormick was one of the first students to sign up and strut his stuff behind the microphone. While he's no shrinking violet, the 19-year-old has blossomed by taking center stage.

"It was awesome,” said McCormick. “Because I showed everyone how I sing and do singing and showed it to everyone." 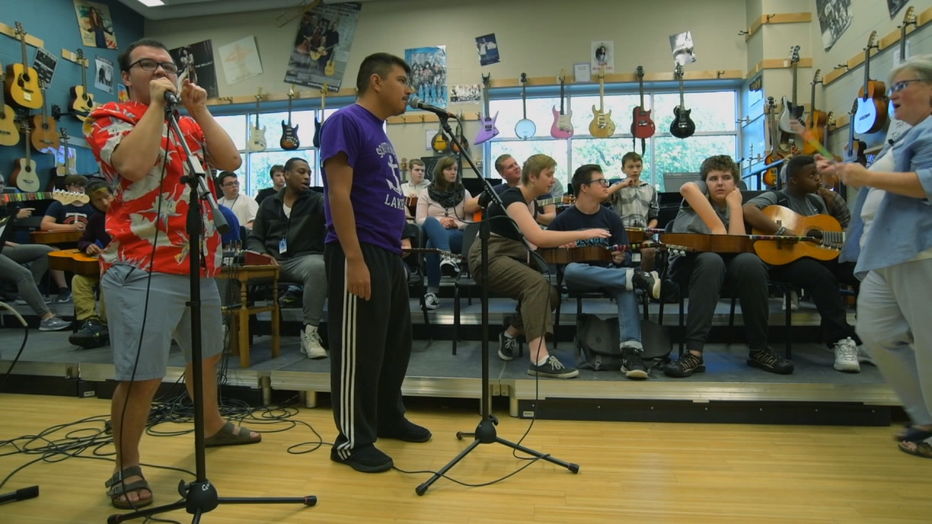 3 Strings plays songs by bands like the Go-Go’s and Katrina and the Waves and they have really struck a chord.

Not only did the band help kick off the new school year for Minneapolis Public Schools in August. They were selected from more than 300 applicants to play at a national convention for music educators in Orlando in November.

Parents say 3 Strings is helping people change their tune about what students with disabilities are capable of.

"It deserves getting the attention,” said Sarah Sexton, a parent of a band member. “So that as an example and teachers can see that wow there is so much potential in all our students. So yeah, it’s extraordinary, but I wish it was ordinary and maybe someday it will just be ordinary."

LeMay hopes it sends her students into the world and into their futures on the right note.

"I like to light the fire,” said LeMay. “I like the passion of what is in music because if you give them the skills to create it or interpret it. Then, they can go anywhere their heart and passion of music goes."

For more information on 3 Strings and their fundraiser to help pay for their upcoming Orlando trip, click here.