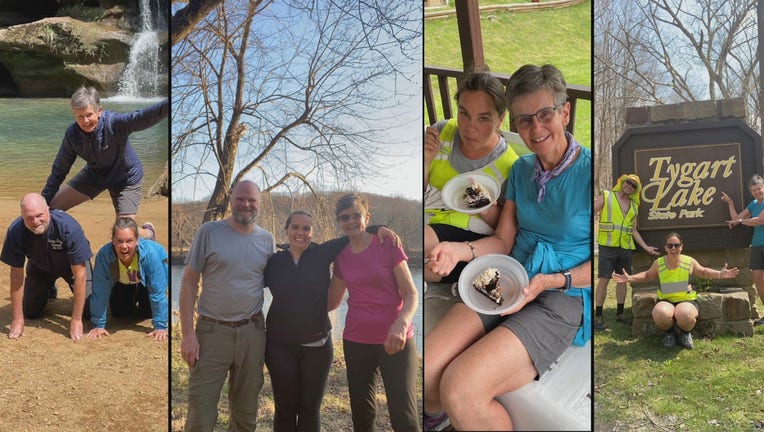 A Bloomington family is hiking across the country, with plans to end in San Francisco.

(FOX 9) - A Bloomington family recently quit their jobs and set off on a hike across the country, from the east coast to the west coast. As of April 26, 42-year-old Erin Dietrich, her 49-year-old husband Chris, and her 71-year-old mom Linnea were traveling through Ohio.

They trained for the hike last winter, in part, by walking for miles inside of the Mall of America.

Minnesota family walking across the country 16 miles per day

A family from Bloomington, Minnesota is walking across the country at a rate of about 16 miles per day, all for a good cause.

"I’m supposed to do this, and I don’t know why, but I mean, that’s really what keeps me going," Erin Dietrich told FOX 9.

She left for the hike on March 3 but won’t be back any time soon.

Chris Rea, Erin's husband, said they planned for it, saved for it and trained for it.

"At my age, I’ve always been a walker," mom Linnea Dietrich continued.

The group wakes up and hits the road each day at 8:30 a.m, walking across America at 16 miles per day.

"We sleep in churches, gymnasiums. We slept in a school house, a one-room school house that was built in the 1880s," Erin said.

They’ve now gone through Delaware, Maryland, West Virginia and Ohio - but not without some tough love from Mother Nature.

"It was terrible," Erin said, remembering a snow storm they encountered while crossing the Appalachian Mountains.

"There have been nights where we are in our sleeping bags, [and] our cores are actually shaking," Erin said.

Still, the journey has been a life-long calling for Erin. She’s using the experience to raise money, allowing young girls to go after theirs.

"We’ve partnered with the Ann Bancroft Foundation, which is an organization out of Minneapolis that gives grants to school-age girls to do extracurricular activities," Erin explained.

Already the fundraiser has brought in more than $10,000 - money earned the hard way for the Dietrichs.

"That constant wear and tear, of no break is tough, but it’s not impossible," Erin said.

The journey will end in San Francisco, after eight months and more than 3,000 miles.

"Being able to say I walked across the country is pretty cool," Erin said.