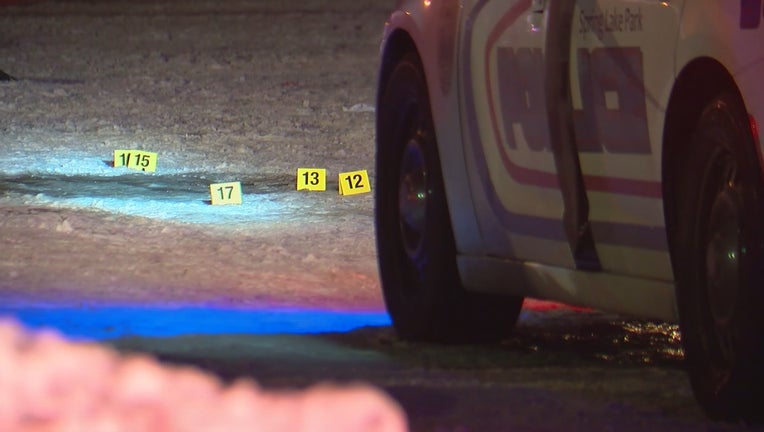 Evidence marks lie at the scene of a deadly shooting in Spring Lake Park, Minnesota. (FOX 9)

The Anoka County Sheriff's Office says nobody is in custody yet.

8 people were shot and a 19-year-old died in a shooting in a parking lot in Spring Lake Park, Minnesota overnight Sunday.

According to the Anoka County Sheriff's Office, officers were called just after midnight to the parking lot of the Dala Thai Restaurant and Banquet Hall at 8407 Plaza Boulevard.

At the location, first responders found multiple people who had been struck by gunfire including a 19-year-old who had died. The man was identified as Chai Yang, of St. Paul.

A 19-year-old man is dead, and six others are hurt, after shots rang out early Sunday morning in Spring Lake Park, Minnesota.

At this time, deputies say their conditions are not known.

A 19-year-old man is dead, and six others are hurt, after shots rang out early Sunday morning in Spring Lake Park, Minnesota.

The shooting happened as a concert was underway at the restaurant's event center. Deputies are looking into any link between the concert and the shooting. Online postings advertised the concert as "Bigg Monster's Ugly Sweater Party featuring Stupid Young" -- an 18 and older show presented by "Midwest Monstaz."

The sheriff's office says the search for a suspect is underway but there is no ongoing threat to the public. Law enforcement is asking anyone with information about the shooting to contact detectives at RS-CID@co.anoka.mn.us or at the county's crime tip website.

Anoka County has identified all the victims of the shooting Sunday evening, none of whom are believed to have life-threatening injuries. They are: