WASHINGTON (AP) - Bleak new figures Thursday underscored the worldwide economic pain inflicted by the coronavirus: The number of Americans filing for unemployment benefits has climbed past a staggering 30 million, while Europe’s economies have gone into an epic slide.

And as bad as the numbers are, some are already outdated because of the lag in gathering data, and the true economic picture is almost certainly much worse.

The statistics are likely to stoke the debate over whether to ease the lockdowns that have closed factories and other businesses. While many states and countries have pressed ahead, health officials have warned of the danger of a second wave of infection, and some employers and employees have expressed fear of going back to work when large numbers of people are still dying.

In the U.S., the government reported that 3.8 million laid-off workers applied for jobless benefits last week, raising the total to 30.3 million in the six weeks since the outbreak took hold. The layoffs amount to 1 in 6 American workers and encompass more people than the entire population of Texas.

Some economists say that when the U.S. unemployment rate for April comes out next week, it could be as high as 20% — a figure not seen since the Depression of the 1930s, when joblessness peaked at 25%.

The number of Americans thrown out of work could be much higher than the unemployment claims show, because some people have not applied and others couldn't get through to their states' overwhelmed systems. A poll by two economists found that the U.S. may have lost 34 million jobs.

There was grim new data across Europe, too, where more than 130,000 people with the virus have died. The economy in the 19 countries using the euro shrank 3.8% in the first quarter of the year, the biggest contraction since the eurozone countries began keeping joint statistics 25 years ago. 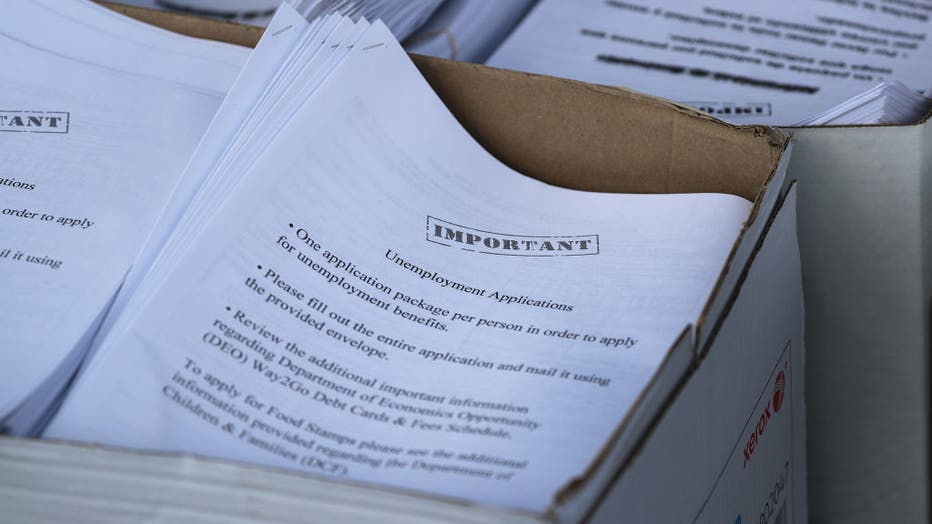 An unemployment application is seen in a box as City of Hialeah employees hand them out to people in front of the John F. Kennedy Library on April 08, 2020 in Hialeah, Florida. (Photo by Joe Raedle/Getty Images)

“This is the saddest day for the global economy we have ever seen” in the 50 years that economists at High Frequency Economics have been following the data, they wrote in a report.

Even then, the statistics do not capture the enormity of the economic crisis. The quarterly figures cover January through March, and many of the lockdowns in Europe and the U.S. were not imposed until March — the second half of March in a multitude of places in the United States.

Stocks fell on Wall Street as the discouraging news piled up, with the Dow Jones Industrial Average losing nearly 290 points, or more than 1 percent.

The virus has killed over 230,000 people worldwide, including more than 61,000 in the U.S., according to a tally by Johns Hopkins University. Confirmed infections globally topped 3.2 million, with 1 million of them in the U.S., but the true numbers are believed to be much higher because of limited testing, differences in counting the dead and concealment by some governments.