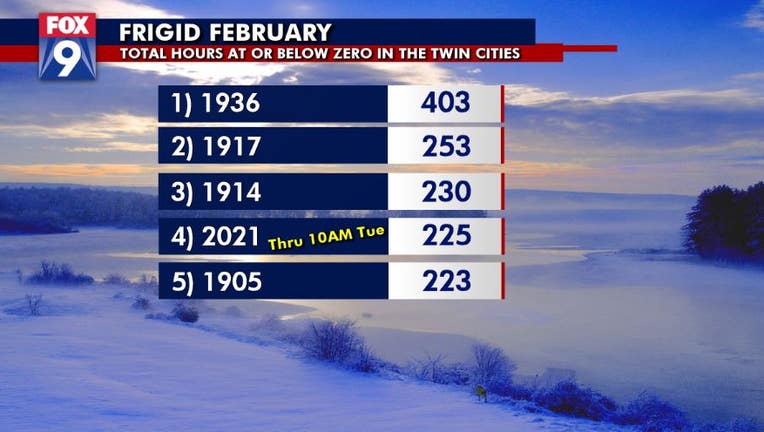 This is the most time the Twin Cities has spent at or below zero in the month of February since 1936. The Twin Cities are now 4th place all time at 225 hours. (FOX 9)

(FOX 9) - While few daily records have been broken with our cold snap here in Minnesota, the persistence of this cold leaves something to be desired.

The Twin Cities has now seen over 225 hours with temperatures at or below zero so far in February ranking it fourth all time, dating back to 1872. We could add a few more hours to the total in the coming couple of nights, but subzero temps will be far less common in the days ahead.

Tuesday’s forecast: A very cold start to the day…with a high around 8

Temps will warm as the week goes along with highs in the 30s possible this weekend.

The cold has certainly been persistent in Minnesota, but it stretches far beyond our borders with subzero temperatures reaching nearly to the Mexico border. Snow, ice, and dangerous cold have been felt in more than half the country with millions now without power and roads still impassible from parts of Texas to New England. Some areas are experiencing cold that they haven’t seen in decades. 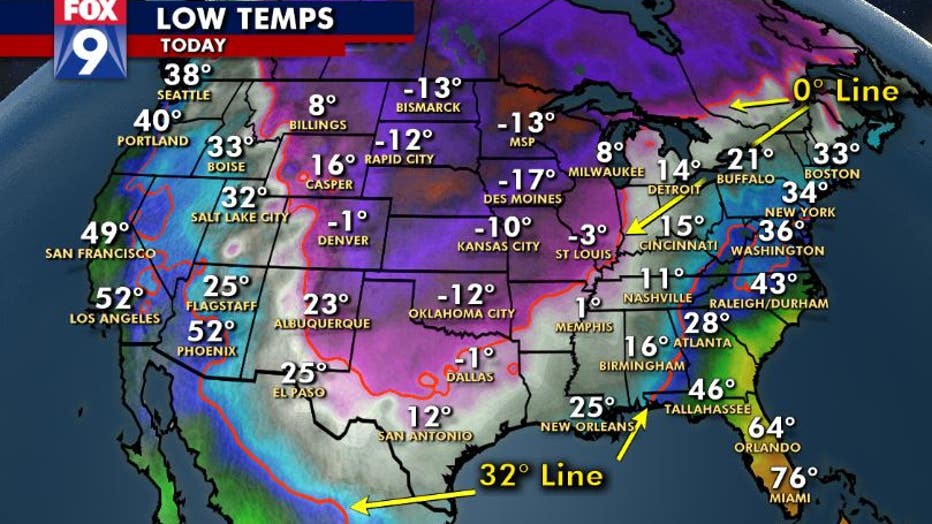 Much of the United States is currently experiencing the coldest temperatures they have seen in decades. (FOX 9)

Not far from here in Lincoln, Nebraska they had the second coldest temperature ever record Tuesday morning at -31 degrees. Farther south in Oklahoma City, it was the coldest morning since 1899. Dallas dropped below zero for just the fifth time ever, hitting the chilliest number since 1949. To the east where 10 inches of snow fell in Little Rock on Monday, they dropped to zero for the first time in over 30 years.

Now 73% of the Lower 48 has snow on the ground, marking the largest areal coverage since the figure started being tracked back in 2003.