(FOX 9) - Here comes the most classic Minnesota weekend ever that may just push our passive aggressiveness toward spring into full on panic mode.

After what has been a mostly pleasant and relatively dry three or four weeks, it’s turning cold (for May) and even snowy for some. But before you pack your bags and head for Florida, you can keep the shovel in its “summer home” because accumulation of any kind will be hard to come by.

I understand that it’s more about the overall loathing of even mentioning the “s” word this time of year than the actual amount of whatever may be headed our way. We get to May and we are all WAY over even the idea of it. All we want is for the calendar to pass April and be able to say “see ya next year.”

But falling flakes in May is almost a right of passage for Minnesotans. It’s one of the few locations left in the Lower 48 (that isn’t located in the mountains) that can cool enough to actually experience snow this time of year. And it may surprise you to learn, that it happens way more often than you might think. 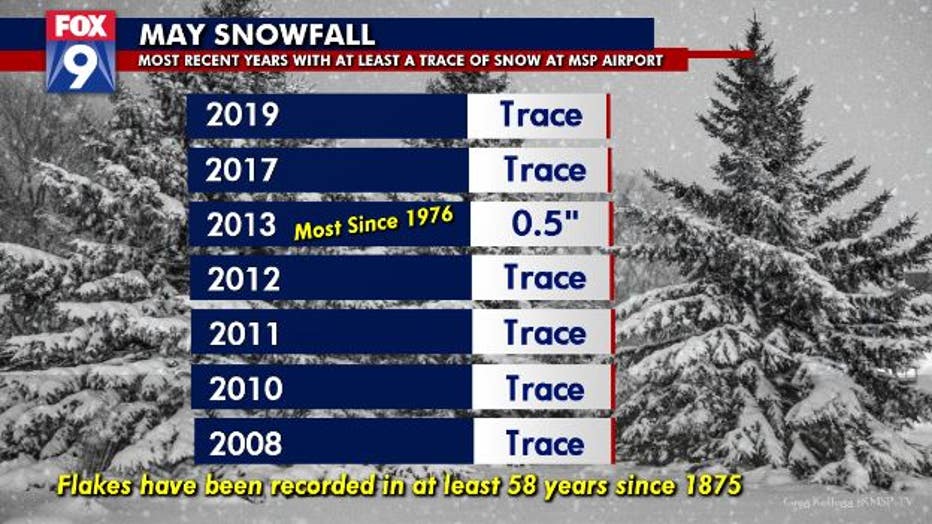 A list of the most recent years that the Twin Cities has seen at least a Trace of snow in the month of May.

Accumulating snow (anything at or over 0.1”) in May in the Twin Cities is quite rare. It’s happened just three times since 1976, and all cases were a half inch or less.

That said, simply just seeing snowflakes or getting a tiny little dusting on grassy surfaces (called a “trace”) is quite common. It’s happened in seven of the last 12 Mays, that of course includes the half inch we saw back in 2013.

If you look back at all time records, we have seen at least a trace of snow in at least 58 years since 1875. That’s exactly 40% of the time. That said though, the definition of a trace of snow has changed over time. There have been times where that has meant a dusting of snow. There have also been times where if the observer saw a flying snowflake, then it was considered a Trace. This was done to record that it was actually cold enough for precipitation to fall as snow. Now, because of the shifting definition, there are years where we likely had a few snowflakes during the month and it didn’t end up getting recorded. So, you could argue that we experience snowflakes in AT LEAST 40% of every May since 1875. 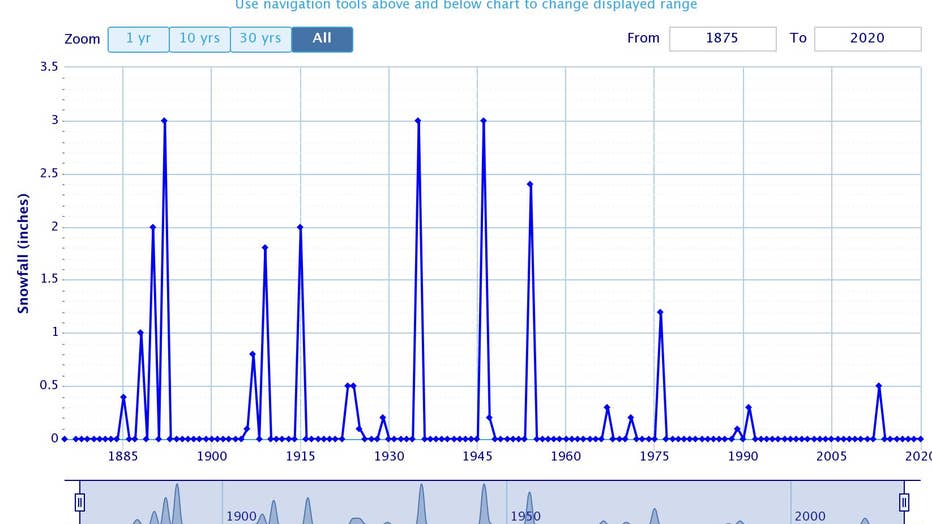 Total snowfall recorded at MSP Airport each year during the month of May. Accumulating snowfall during the month has been far more rare since the 1970s. That said, the snowy Mays have only seen 3 inches, so it's not exactly known for "mega" snows.

I have some good news, though, if all of this snow talk depresses you. While it may be chilly off and on for the next few days, there’s hope. Longer ranged forecasts continue to point toward a much warmer pattern beginning next weekend. This will likely put an end to freezing temperatures and snowflake possibilities this season (at least for the Twin Cities) so just hold on a few more days and we’ll be right back into full on spring mode.